It turns out that you can Kickstart just about anything- even potato salad. Zach Danger Brown was only after $10 but since the project made the news, things blew out of proportion and he has now raised over $35,000. He’s making the most of it though, as he has gone ahead and added a bunch of stretch goals.

The Potato Salad Kickstarter has now raised more than $35,000 thanks to 3,296 backers. Once the campaign reached its $10 funding goal, some stretch goals were added. At $35 Brown decided that he would make four times as much potato salad, $75 earned backers a pizza party, $100 would ensure two different kinds of potato salad. 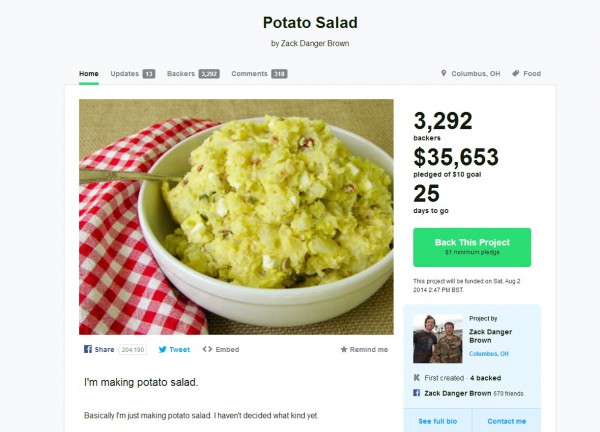 Once the previous stretch goals were reached, more were added:

At $3000, Brown decided that he would rent out a hall and invite people down to watch him make potato salad. The campaign has now made way more than $3000 but new goals haven’t been announced.

The campaign starter admits that he has not made potato salad before in his Kickstarter FAQ but clearly the Internet wants him to learn how.

KitGuru Says: $35,000 is a lot of money for potato salad and the campaign still l has 25 days left to go, at its current rate, the Kickstarter will end up raising closer to $100,000. The campaign page is actually quite funny, you guys should go and take a look…

Previous NASA to use smartphones for robotic intelligence
Next Ubisoft: ‘DLC is pretty much accepted’