Earlier this year, when the world's most recognised online drug's marketplace, Silk Road 2.0, was hacked and all of its users' bitcoins stolen, many considered it the death knell of the site and even the trade itself. Security and confidence in the site were torn asunder, as people came to understand that without a single point of escrow, users were forced to return to the honour system of paying up front for their illicit substances. However, over the past six months since the hack, Silk Road has been paying back those that lost money on the ‘Road and the admins have announced that this week they expect to send those last few bitcoins out to the affected.

“We are extremely proud to announce that nearly all victims of February's Bitcoin hack have been repaid,” reads the address on the site's homepage. “Our admin team estimates that full repayment will be complete during the week of August 11th.”

Since the original hack, site admins have pledged their commissions to repaying the community, with all funds that traditionally ended up in the pockets of the site's management, being given instead to those that lost coins in the hack. This led to a quick turnaround, with current prominent admin, “Defcon,” announcing in May, that over 82 per cent of affected users had been repaid what was lost. 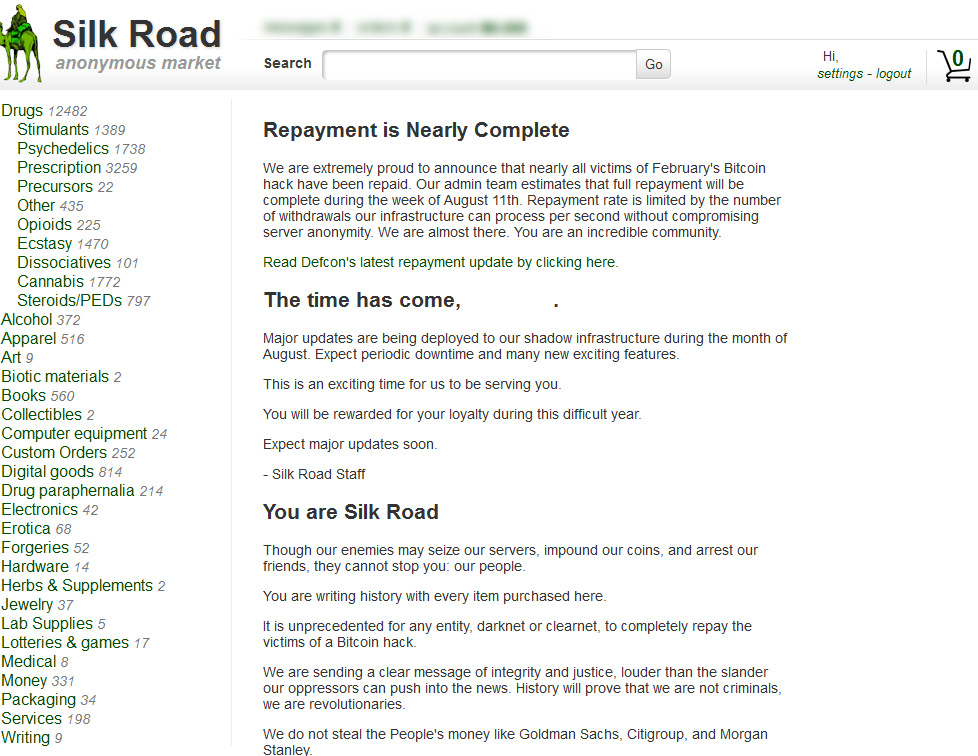 Defcon did say last week on the official forums, that there was a slight delay in this last round of repayments, as its new multiple-redundancy bitcoin storage system takes longer to move funds around than the original system which was cleared out back in February.

Moving forward, the admins have promised a new, distributed escrow system that will protect buyers and sellers, as well as many new features to the site's back end. As with previous site admin(s) Dread Pirate Roberts, there's a lot of philosophy in the latest round of updates:

KitGuru Says: As with all stories relating to the ‘Road, KitGuru doesn't recommend any of you visit it or use it any capacity.