Intel's latest revision to its High-End Desktop (HEDT) platform is upon us and that means one thing is for sure – new processors and motherboards. Bringing the HEDT platform to the feature-rich realms of 2014, new motherboards based around the LGA 2011-v3 socket will use an X99 chipset that possesses many of the goodies found on the mainstream 9-series core logic, as well as more.

The hectic and somewhat problematic nature of these launches means that our processor article will be published over the coming weekend – we didn't want to rush and compromise on the quality of the content. In the mean time, we take a brief look at Gigabyte's X99 SOC Force motherboard to show early adopters the features they can expect. Our full, in-depth review will be published in the coming week. 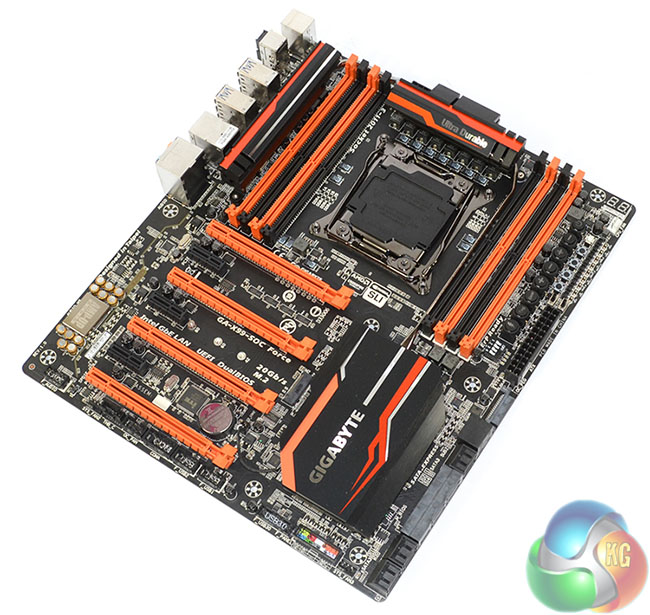 Launched for the company's X58-OC motherboard, Gigabyte is still using the unique orange and black colour scheme for its OC series parts. The ostentatious orange adds an effective touch to the black. The OC boards' unique colour scheme is rapidly gaining iconic status thanks to Gigabyte's continued utilisation of the style. 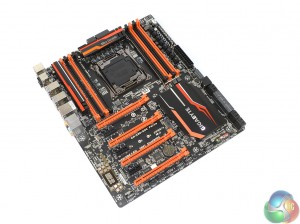 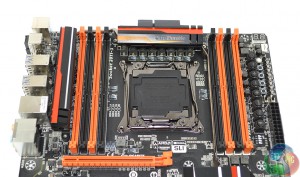 To provide extra cooling capacity for the power delivery system, which could be particularly relevant when an 8-core CPU is over-volted and demanding high currents, Gigabyte uses a multiple heatsink approach. Two individual heatsinks cool the power delivery system and are connected to each other, as well as the chipset heatsink, via a single heatpipe. This design decision increases the cooling capacity for the MOSFETs.

On the motherboard's right side are the overclocker-orientated buttons, switches, and reading points. 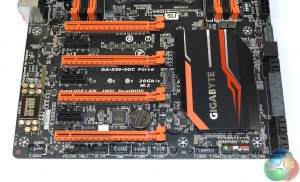 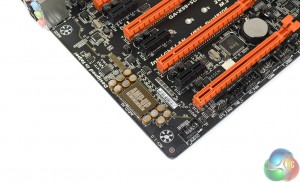 With the chase for benchmarking world records in mind, Gigabyte designs the X99 SOC Force to provide capacity for 4-way SLI/CrossFire graphics configurations. 40 lanes from a relevant Haswell-E CPU will be split between the four full-length PCIe slots.

Situated beneath the second x16-length PCIe slot is the motherboard's M.2 connector. Gigabyte routes four PCIe 2.0 lanes through the port to provide up to 20Gbps of bandwidth. Converted into real-world terms, that's up to a theoretical 2GBps through an appropriately-fast M.2 SSD.

Gigabyte also outfits the X99 SOC Force with its Amp-up audio solution. Based on the Realtek ALC1150 codec and supported by Nichicon capacitors, the beefed-up audio solution is present for those times when extreme benchmarking is not taking place.

A hefty set of rear IO ports stills shows reference to the underlying overclocking design of Gigabyte's board with its OC button and DualBios switch.

A plentiful supply of USB 2.0/3.0 ports is also present, as is an Intel-based GbE port.

While it may have plenty of features to make a user's overclocking experience more enjoyable, numbers are also key to judging the X99 SOC Force. Check back soon for overclocking and benchmarking results with our i7 5960X CPU.