Kitguru were lucky enough to receive an invitation to Creative Assembly’s offices last week for an early look at Alien Isolation. We thought that Sam Grant, being a big brave gamer type, would be the right person for job. We were wrong. Here is his account. 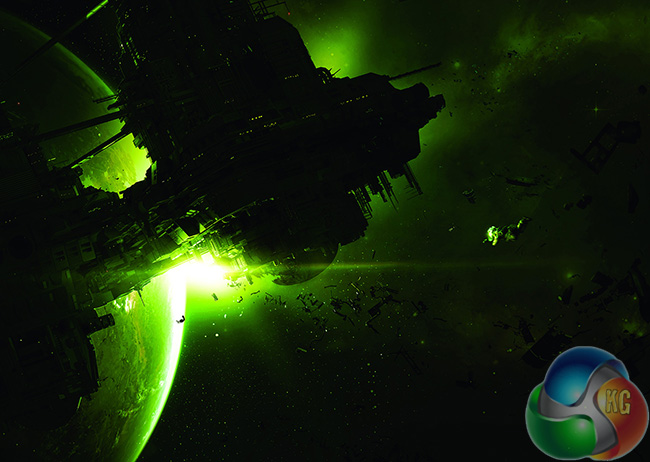 It was about 15 years ago, in the demo for Aliens vs Predator. I was hunched down, backed into the corner of the claustrophobic transport vehicle that would soon become my oversized metal coffin. My rifle was trained on the all-too-close, all-too-open door. I could hear them outside.

A slick, sleek, spiny black nightmare came hurtling through the door, I opened up on the bouncing terror, a weird sounding torrent of whatever it is that pulse rifles fire mashed the oncoming alien into green paste, it was no good, a tide of acid proceeded to spurt into my face and turn me in a bubbling, gurgling, indignant mess.

As more aliens poured into the tiny vehicle, I couldn’t help reflect on my cowardice. Vowing to do better next time, I reloaded the checkpoint.
Two minutes later I was cowering in the back of the car again until some phallic shadow decided to bound around the doorway to rip my skull out of my face, I uninstalled the game shortly thereafter.

I am not good at scary games, additionally; I’m awful at stealth games.

A fine thing it is then, that I found myself heading out to Creative Assembly to have a go on the upcoming Alien: Isolation. Could this be an alien game geared towards my shamelessly cowardly play style? I hoped I had the willpower to play long enough to find out.

At Creative Assembly’s offices, I was ushered into a dark room with a load of consoles set up in with enormous screens, the general sense of dread and unease I’d been nursing kicked it up a notch. Numbly I sat down and took up a controller as alien to me as the antagonist I was going head to head against. 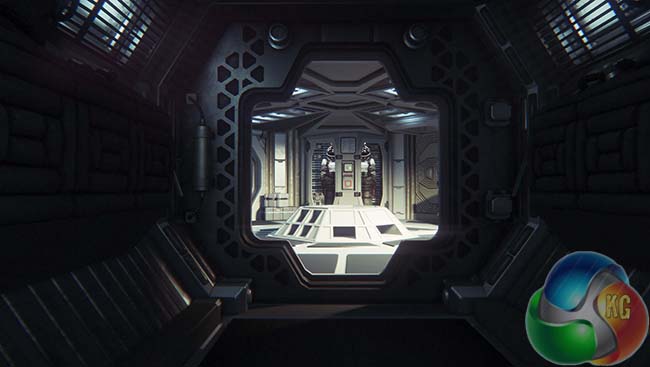 The demo level loaded up, I took a few moments to figure out the controls and reluctantly set out into the dark, noisy corridors of my nightmares. After a while spent exploring, screaming at nothing and ticking off objectives, everyone’s favourite acid-blooded bite-peddler casually lowered itself down from an air vent and went off down the corridor for a bit of a wander. I didn’t move from under the bed I’d hidden under for about ten minutes, I just wanted him to bugger off somewhere else, scare someone else, develop a hobby or take a nap. Anything really.

The game was afoot, I was going to have to get sneaky, find a way around him and somehow find enough time to manually tap in the door code to get on my way.

I died about thirty times instead. 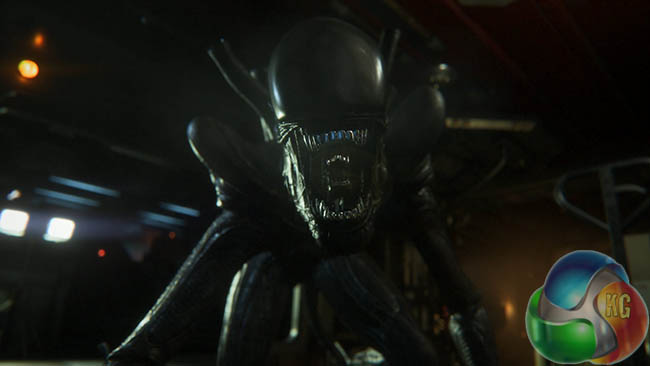 You’ll be seeing this a lot.

It’s this repeated dying that drew my attention to what I think might be set to irritate a lot of players, there’s no autosave, and you can only save at designated savepoints, clunky old phonebox looking things that have a pretty lengthy cooldown after activation. You will not save often, but you will die and return to savepoints a lot.

Most of the time this isn’t a big deal since geographically speaking the save points are spaced quite frequently, but it’s always going to frustrating to have to trek through the same areas you’ve already cleared with minor difficulty before dying repeatedly at some infuriatingly difficult section. It can start to feel like work, turning fear and tension into frustration.

It’s a tough call, but I’m in favour of the save system, however frustrating it might get. I’ve not had a moment in gaming provide as much a sigh of relief as hitting an objective and getting safely back to a savepoint in Isolation. It’s worth noting you can die midway through the saving animation too, just for that extra bit of nightmarish tension. 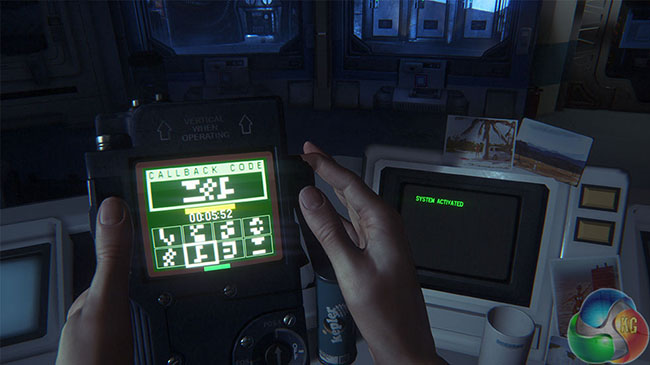 Hacking manages to be just about easy enough to pile on the pressure without being tedious.

In fact, interacting with anything at all in the world seems to have been designed to give you a sense of impending disaster, whether it’s repeatedly bashing a button to operate a crank, hacking a computer or trying to remember a key code while the alien’s thundering after you, it’s really done a good job of capturing that horror movie feel. Suddenly you’re the stereotypical victim struggling to start the car while the murderer strolls up, they’ve nailed that sense of mounting frustration followed by short-lived relief. It’s hellish in an addictive way. 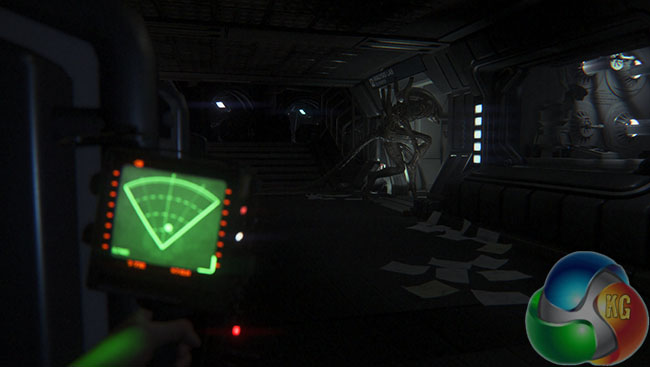 The depth of field shifts to the foreground when you’re on the scanner.

As a heads up I’ll say it’d be a big shame to play Isolation without a decent set of headphones, the sound design from the alien to the environment to the dynamically shifting music is absolutely fantastic, one nice touch is that you can rely on the music as a sort of secondary scanner device, if you’re checking out a room when suddenly it’s all spooky violins, you’d better find somewhere to hide. 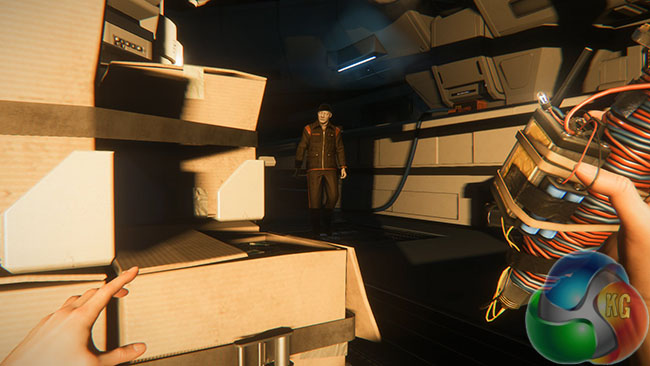 Synthetics have a very casual approach to stamping on faces.

Visually the game’s a joy, as you can probably tell from various screenshots and bits of footage floating around, my only concern was a couple of clipping issues and animation cycles, I had the alien’s head warp through into the locker I was hiding in at one point. I assume that was a consequence of the enormous character model trotting around in the cramped room I was holed up in. Hopefully issues like this will all be sorted either by release or shortly after.

The real impression that shone through during my time playing was that this was the first Alien game I think we’ve had offered up. We’ve had loads of Aliens games, but like their movie namesake, they’ve been all about mowing down hordes of nasties. Aliens was a Vietnam movie in space, while Alien was Sci Fi Horror, and horror’s what you get in Isolation. I’ve not seen a movie tie-in capture the essence of a movie so completely before now. The crew of the Nostromo couldn’t do a bloody thing against that one first Alien, and neither can you in Isolation.

If I were to compare it to anything else, it’d be a mix of Slender and Dark Souls. Just like in Dark Souls, you’ll die over and over and over again, but each time you’ll figure out something new to work into your plan for next time, while like Slender, you’re primarily dealing with one terrifying threat who has a set of tricks you can learn to work around. 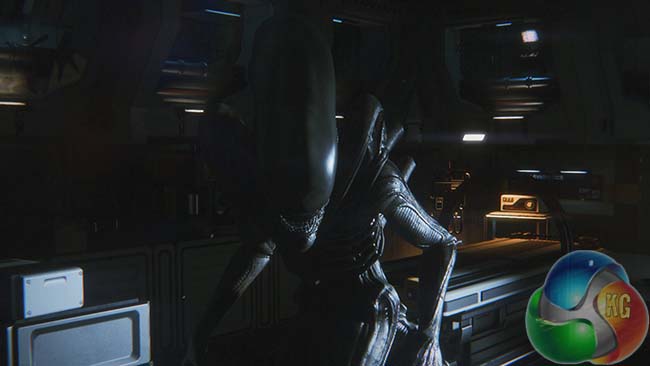 Unfortunately, the alien learns your tricks and develops his own as well, so you’ll never really feel entirely safe, no matter where you are or what you’re doing at any given time. The tension just keeps on piling up until you somehow scrape through to a savepoint, die, or have a heart attack at your desk.

Kitguru says: can hiding in cupboards and repeatedly getting your face bitten off offer enough in terms of gameplay to last a whole game? Has it been long enough for people to get the taste of Colonial Marines out of their mouths? Let us know what you think.