We do not know exactly when companies like Intel Corp., Samsung Electronics or Taiwan Semiconductor Manufacturing Co. make their first chips using 7nm, 5nm, 3nm or 2nm process technologies. But we do know what should happen before leading semiconductor producers manufacture their new chips using ultra-thin process technologies: ASML should sell them appropriate tools to do so.

At its investor day in London earlier this week ASML outlined its roadmap till 2019 – 2020. The world’s largest producer of lithography equipment for production of chips believes that while current-generation deep ultraviolet (DUV) with multi-patterning as well as other ways of shrinking geometry of integrated circuits will work for a number of years to come, eventually makers of chips – whether they manufacture memory or logic – will have to transit to extreme ultraviolet lithography (EUV). In general, the industry experts agree with ASML, so when it comes to sub-10nm fabrication processes, the chipmakers and ASML invest a lot in EUV. 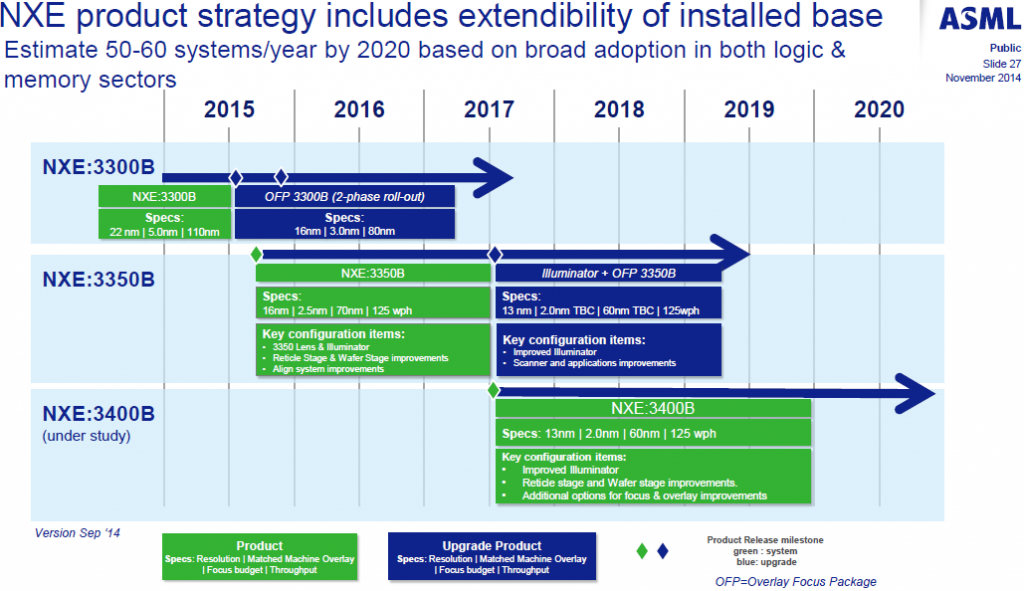 At present ASML offers NXE:3300B semi-experimental EUV scanner (which will be upgraded in 2015 – 2016 with new light source to support commercial production volumes) as well as NXE:3350B EUV scanner to makers of semiconductors. The scanners support 16nm half-pitch (HP) resolution and are expected to be used for production of chips using 10nm and 7nm process technologies. However, to support thinner process technologies new manufacturing equipment will be needed. 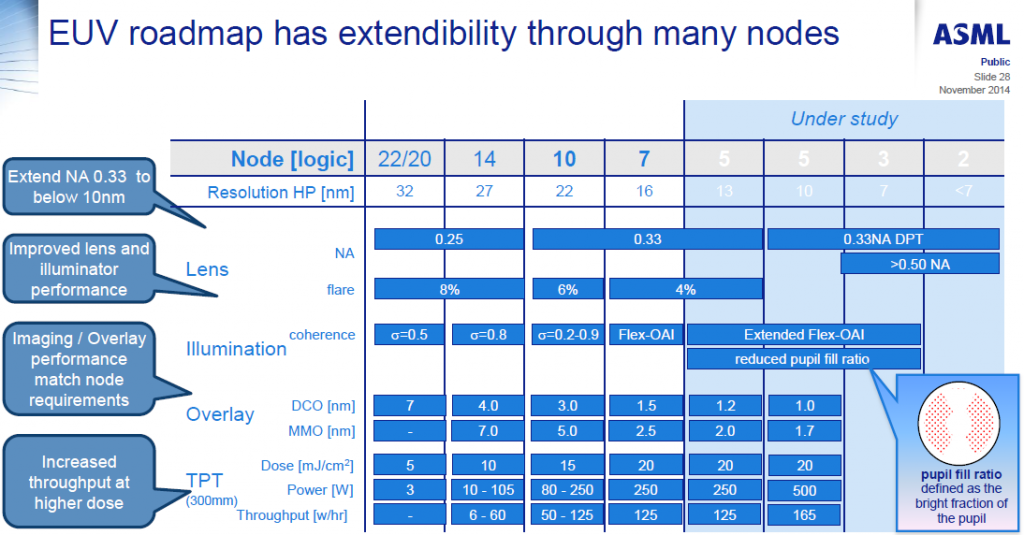 To make chips using 5nm fabrication process, ASML believes that it will need to reduce the the half-pitch resolution of the generated patterns to 13nm. To do so, the company plans to upgrade the NXE:3350B and to introduce its all-new NXE:3400B EUV scanners in the second half of 2017 or sometimes in 2018. Using the new equipment, semiconductor manufacturers will be able to start learning how to make integrated circuits using 5nm manufacturing technology in 2018, more than two years before such chips will be made commercially.

In addition to development of its NXE:3350B OFP and NXE:3400B scanners ASML already envisions requirements for semiconductor manufacturing equipment that will be used around ten years from now to make chips using 3nm and 2nm process technologies.

KitGuru Says: Despite of the fact that many predict the end for Moore’s Law, it looks like it will continue to be valid for another ten years. At least, ASML and Intel clearly think so.