When Turtle Rock let the world have its first real taste of its upcoming asymmetrical, multiplayer shooter/stomper, Evolve, it was pretty well received, but quite a number of people said it became dull after a few games due to limitations in maps and game modes. Since that big alpha though, we've seen several new maps and today we get our first look at a new game mode called “nest.”

Nest mode is a little bit different than the hunt mode we're all used to at this point. In nest, the objective isn't to kill the monster, or the hunters (though those goals still win you the match), it's all to do with the eggs. When you spawn on the map as the monster, you'll have six pre-laid eggs which you have to defend. 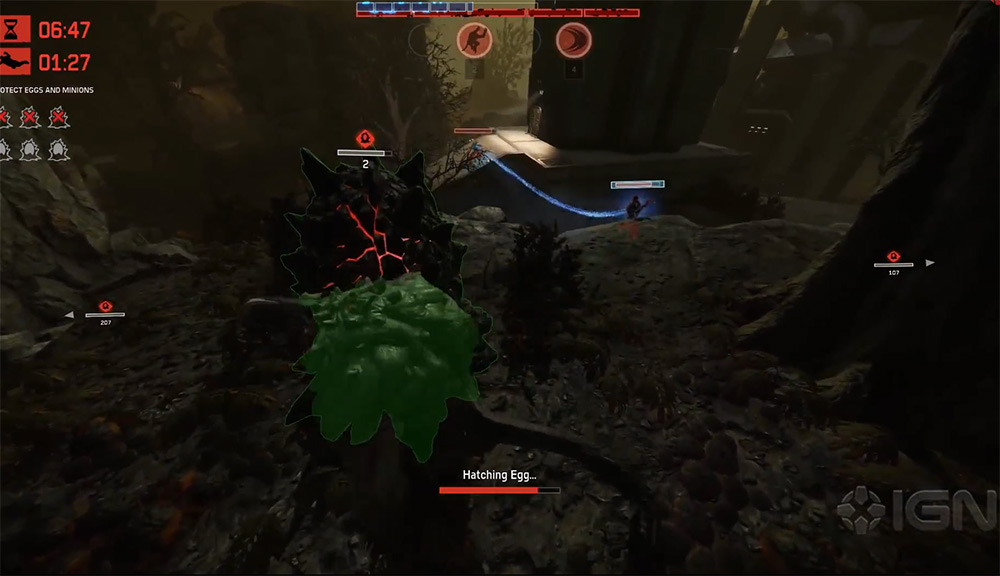 Eggs are tougher than minions, but they can't fight back

The hunters, for their part, have to destroy the eggs. To pile the pressure on too, they only have 10 minutes to do it. This makes it a little more tense than standard hunts, as you're really against the clock as the hunters. If a monster can even delay them for a few minutes, it might be enough to carry the day.

As long as he doesn't die in the process.

To make that a little easier to avoid, the monster can also call in some help from his hatchling pals, sacrificing one of the eggs to spawn a minion which we're told has all of the abilities of your chosen monster, but a lot less health and armour. Essentially it acts like a stage one version of you.

These minions are pretty mindless however and will simply try and chase down the nearest hunter and you can only have one of them at a time. Whether it's worth it to gain one of these allies to sacrifice one of your precious eggs, will be down to you.

KitGuru Says: What do you guys think of this game mode? Does it give you hope for more much more varied gameplay when Evolve ships in February next year?