A Chinese web-site has published what it claims to be preliminary performance benchmarks of an upcoming high-performance graphics card from Advanced Micro Devices. Just like previous unofficial test results, the new ones indicate that AMD’s forthcoming high-end graphics solution will beat everything that is available on the market today except the dual-chip Radeon R9 295X2.

Chinese-language Chiphell web-site has once again published alleged benchmark results of an unknown AMD graphics card that is claimed to be the forthcoming flagship Radeon R9 graphics solution. Recently AMD employees confirmed that the next-gen top-of-the-range single-chip solution will be called the Radeon R9 380X; hence, it is highly likely that the web-site published the so-called benchmark results of this product. The company used a picture of an island instead of an actual name on its graphs. 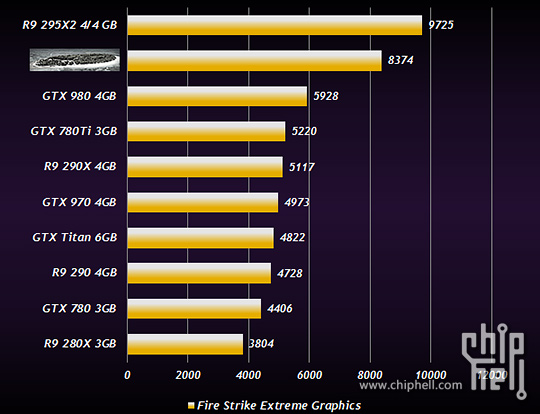 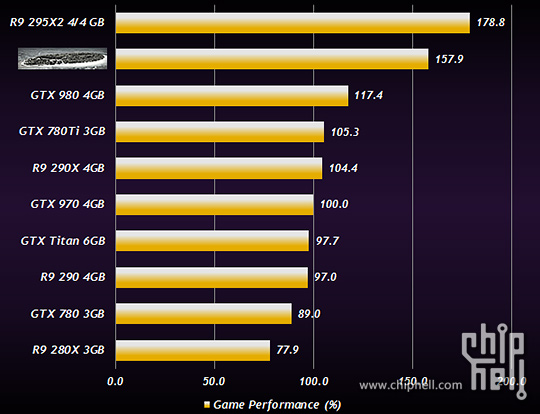 Another graph published by the web-site reveals relative performance advantage the alleged Radeon R9 380X has over existing graphics adapters. If the numbers are correct, then the novelty is around 58 per cent faster than the GeForce GTX 970 and the Radeon R9 290X, which is something that was expected.

The data by Chiphell further shows that the Radeon R9 380X consumes up to 295W, but thanks to usage of a hybrid liquid + air cooler, the GPU temperature is only about 73°C.

In general, the published data looks interesting. However, it should be kept in mind that the Radeon R9 380X is due in several months’ time and it is unclear whether at present AMD has finalized specifications of the commercial product or not. Final configuration and final clock-speeds are usually finalized weeks before commercial shipments, whereas drivers are released sometimes days before the announcement. As a result, it is pretty hard to make conclusions about performance using preliminary hardware and software.

It is expected that the Radeon R9 380X is based on the GCN 1.2 architecture and sports 4096 stream processors as well as 4GB of stacked high-bandwidth memory (HBM) with up to 640GB/s of bandwidth.

KitGuru Says: If the Radeon R9 380X truly delivers 50 per cent performance improvement over the Radeon R9 290X, it will be a very good result that will probably let AMD and its partners to sell loads of such graphics cards. Unfortunately, we have no idea when exactly AMD plans to roll-out its new product. As a result, we do not know what Nvidia will use to compete against the new GPU from AMD. The Santa Clara, California-based GPU developer is not standing still and is working not only on its new-generation GeForce GTX Titan based on the code-named GM200 GPU, but is also developing new solutions to refresh its lineup this fall.