HBM3 to double bandwidth and pave way for 64GB GPUs

We might still be waiting to see widespread use of HBM 2 in graphics cards but that isn't slowing down news on the future of High Bandwidth Memory as this week, reports began popping up going over HBM3 and the improvements it should bring, including improved density, efficiency and more.

HBM3 is in development and while HBM 2 is limited to 8GB individual memory dies, HBM3 will double this to 16GB, paving the way for GPUs with as much as 64GB of High Bandwidth Memory. Aside from that, core voltage will be lowered, improving power usage and efficiency. 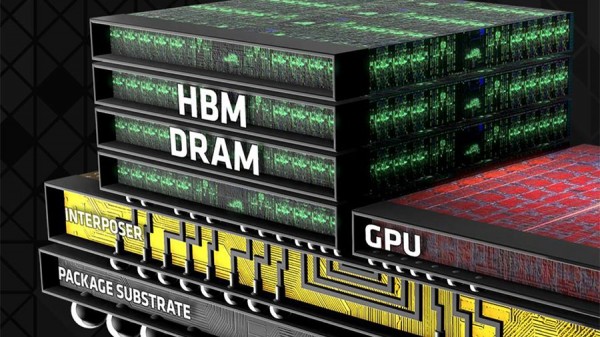 Right now, HBM2 offers 256GB/s of bandwidth per layer, this will be doubled to 512GB/s per layer with HBM3, so essentially, the memory is going to be incredibly fast. The last big selling point for HBM3 is that it will be cheaper to make than previous versions, which could help with widespread adoption on graphics cards.

All of this information was apparently shown off at the Hot Chips Symposium in California, we weren't there but thanks to Ars Techinca, we got the jist of the details. The final thing that caught our eye from the spec slide, is that Samsung is also involved with making HBM3 but it is not scheduled to launch until 2019/2020, so we still have plenty of time for HBM2 to potentially catch on.

KitGuru Says: While it is nice to see some new details for HBM3, we have yet to really see what HBM2 is capable of, as so far, it is extremely limited and not present on mainstream graphics cards. On top of that, HBM3 isn't scheduled to launch until 2019 at the earliest according to the slide, so there is quite a wait ahead. Do you guys think HBM will eventually catch on in gaming GPUs? Many were expecting to see HBM2 on this year's Pascal cards but as far as gaming goes, GDDR5x seems to be doing the trick.