Thermaltake prides itself on being innovative with its cases, with aesthetic often first and foremost for the brand. This year is no exception, but instead of iterative upgrades to older models, the company has opted to experiment with triangular prism shapes, curved tempered glass and, of course, patented RGB lighting.

We managed to get a look at Thermaltake’s triangular prism shaped Core P90 case back in November, offering three different placements via standing upright, laying down horizontally or even wall mounted. The Core P90 is set to come in two variants, one with a traditional black body and a second that opts for a coat of silver paint, dubbed the Titanium Edition. 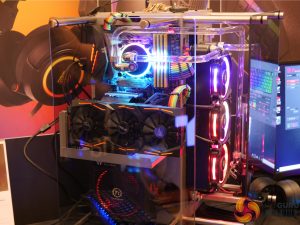 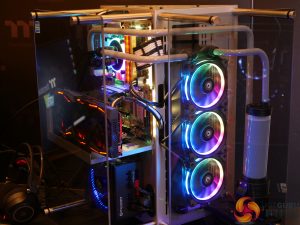 Both editions contain the same 7 modular storage bays, the ability to vertically mount the GPU and even PSU, as well as enough space to house up to a single 480mm watercooling radiator and a second 420mm radiator. This makes the case prime for modders to tinker with, as shown by Stuart Tonks in the pictures below. 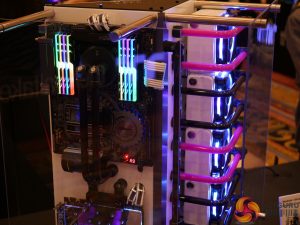 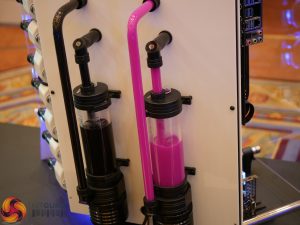 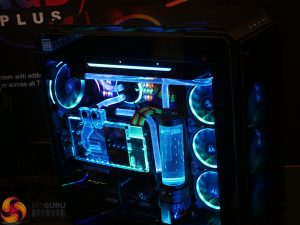 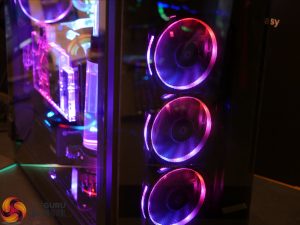 This should give you an idea as to how big the case is, enabling it to fit 600mm graphics cards, 220mm PSUs and 200mm tall CPU coolers with ease. Storage wise, bays can be removed, or users can make use of the twelve 2.5-3.5″ slots and 10+2 expansions for more gigabytes than you can shake a stick at. So far, Thermaltake has announced two variants of the case, with a standard black edition and a Snow Edition which comes in white. 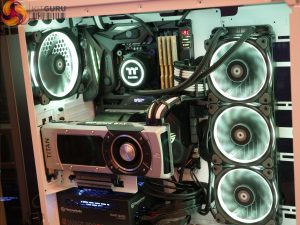 Of course, the company isn’t beyond iterative upgrades to well established cases, as it offers a new Curve variant to its Core 3. The original Core P3 housed one sheet of tempered glass while leaving the top, bottom and sides unshielded. The Core P3 TG Curve adds a curve to its front side, seemingly taking a cue from the direction in which smartphones are headed. There's even an upgrade kit for owners of the original Core P3. 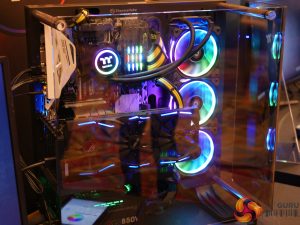 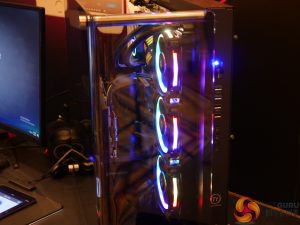 Finally, Thermaltake caps off its 20th celebration with an update to its 10th anniversary case, the Level 10. Introducing the Level 20, the case takes the same segmented form as the Level 10 to isolate component thermals, but adds tempered glass displays to each portion. 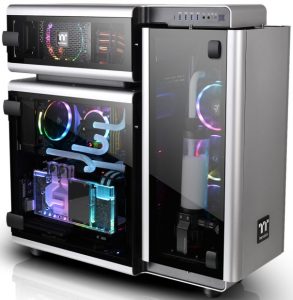 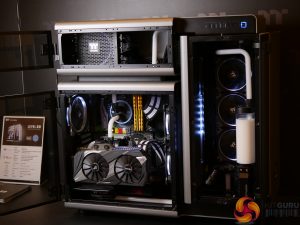 The case isn’t the most spacious, but will still house 200mm tall CPU coolers, 300mm graphics cards and PSUs up to 220mm long. If users are willing to switch out the eleven drives, they can instead opt for a watercooling pump for one of the most stylish rigs Thermaltake has made yet.

KitGuru Says: It seems that 2018 is a big year for Thermaltake regarding its chassis department, and it’s nice to see the company push the boundaries on trying something different. Which case is your favourite?

Previous CES: Asus gives us a sneak peek at the Zenphone Max Plus ahead of February launch
Next CES: Thermaltake swaps aluminium for copper with its new liquid cooling line