Corsair’s Hydro series of AIO liquid coolers are often regarded as some of the best on the market. Varying from single slim 120mm radiator designs, all the way up to beefy 360mm options, the Hydro line-up has something for everybody. For a long time, the H100i was the favourite of the bunch, and this week, Corsair is launching a new and improved version- the H100i Pro.

The Corsair H100i PRO has an improved design over its little brother, including a redesigned cold-plate and an adjustable low-noise pump. The radiator is 240mm and is mounted via a tool-free mounting bracket. 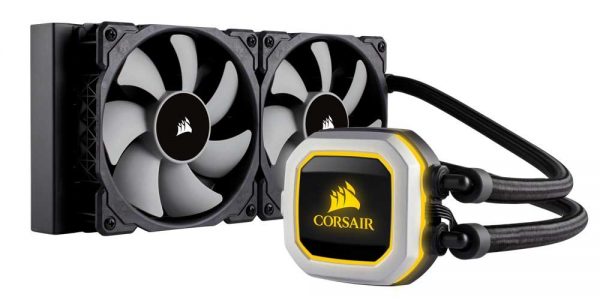 In addition to that, the H100i Pro comes with two ML120 fans that support a zero RPM profile, this allows you to passively cool your CPU when it's not being stressed. When maximum cooling capabilities are needed, the fans can range anywhere between 400 RPM to 2400 RPM.

Of course, you can’t have a CPU cooler nowadays without RGB, and that is included on the redesigned pump/waterblock. The RGB lighting can be controlled via Corsair’s iCUE utility.

The Corsair H100i Pro is landing at retail now, with pricing sitting at around the £120 mark.

KitGuru Says: If the H100i Pro performs better than its little brother, then it’ll be worth the price tag. Are you interested in the H100i Pro from Corsair?