There have been a lot of rumours and leaks surrounding Intel’s 9th generation CPUs, which are said to be launching fairly soon. Will there be an eight-core SKU? Will the i7 have hyperthreading? Will it be a new platform? A leak from ASRock has at least answered some of these questions. We now know that Intel will be launching an eight-core CPU and that the existing entry-level H310 chipset will support them.

An ASRock H310 motherboard box leaked over at Videocardz, showing that new shipments will have a sticker on the box confirming eight-core Intel CPU support. This also confirms that H310 motherboards will support these new eight-core processors, although probably with the help of a BIOS update. You can see the leaked image for yourself below: 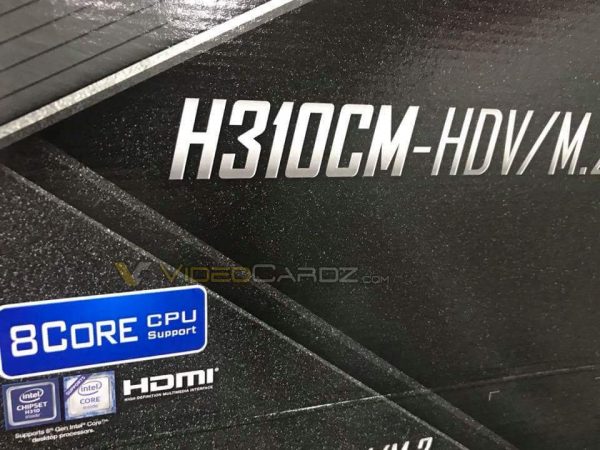 It is very baffling to see such low-level boards have support for Intel’s flagship CPUs, but it isn’t a bad thing to at least have the choice. It’ll be a surprise though if anyone was to purchase a brand-new eight-core CPU and pair it with an H310 motherboard.

KitGuru Says: It is great news that current generation motherboards will be supported, as Intel has been heavily criticised in the past for forcing users to new platforms when there wasn’t really any need for it. Has this changed your mind on buying one of the new 9th Generation Intel CPUs?

Previous Respawn’s Star Wars Jedi: Fallen Order aiming for 2020 release
Next Microsoft plans to do away with intrusive Windows 10 updates thanks to machine learning