Spyro fans had their hopes dashed last year, with no sign that the developer had even attempted to port its Reignited Trilogy to the Nintendo Switch. A new listing courtesy of GameStop’s German branch has breathed new life into the rumours, suggesting a launch later this year.

Ditching the Skylanders version of Spyro, developer Toys For Bob revived the original incarnation of the purple dragon last year by remaking the first three games: Spyro the Dragon, Spyro 2: Ripto's Rage and Spyro: Year of the Dragon.

The elusive Nintendo Switch version of Spyro Reignited Trilogy initially came to light ahead of its release on PlayStation 4 and Xbox One, before being delisted and brushed under the rug. Strangely, the very same drop-down menu now houses an uncomfortable space that potentially makes room for other versions. By December, 2018, there was still no announcement for a Switch version, with producer Peter Kavic stating that Toys For Bob knew nothing about plans to bring the remake to other platforms. 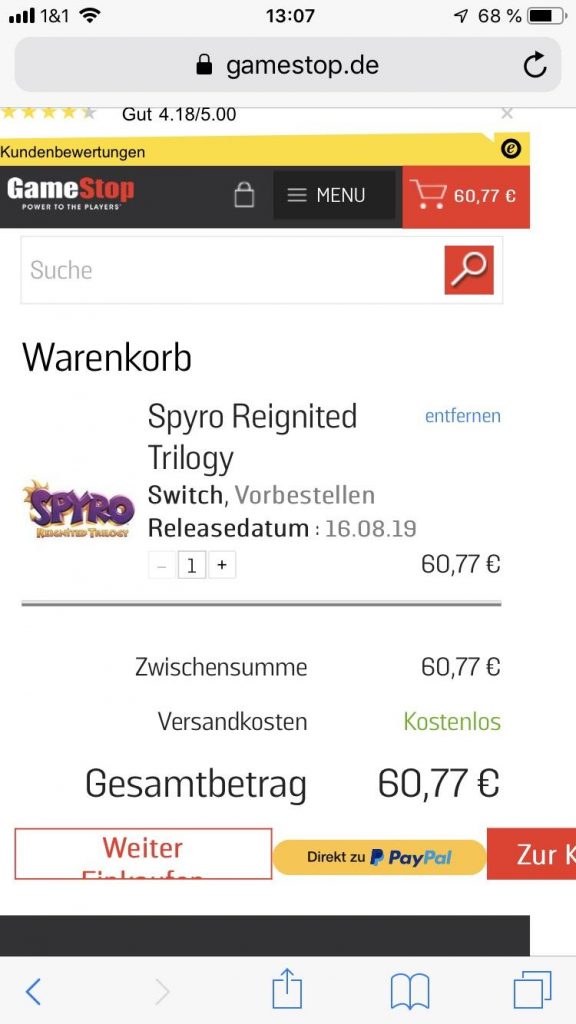 Two months later and it seems as though plans are finally moving forward. Reddit user mrculurien, caught a new listing that appeared on GameStop's German website. Capturing it before it was ultimately pulled; this indicated that a Switch version of Spyro Reignited Trilogy would be arriving on August 16th.

Of course, this could simply be history repeating itself with the listing subsequently forgotten, but the Reignited Trilogy was always expected to follow in the footsteps of the Crash Bandicoot N Sane Trilogy. If this does turn out to be the case and the date holds water, Spyro could also be heading to PC on the same date.

KitGuru Says: Spyro on Switch seems like a no-brainer, offering the dynamic platformer on-the-go. It’s always irritating when fans don’t know whether to hold out for another version or not, undoubtedly a tactic used to maximise sales on the original platforms. Do you already have the game? If so, would you still be picking it up for Switch, should it finally come to the console?