Back in March, we reported on Mountain.GG and its very first Kickstarter campaign for the ambitious ‘Everest’ modular mechanical keyboard. Since then, over 1,000 people have backed the project, which is now fully funded and ready for launch in August.

Since the Everest keyboard is now fully funded, Mountain.GG is also launching a store, so anyone who missed out on the Kickstarter can pre-order one of their own in time. Currently, the keyboard is expected to begin shipping in August. When the keyboard arrives, you will already see some improvements, as the media dock has new firmware that enables new features, making it easy to switch between clock/timer functions, PC monitoring or controlling other functions like RGB lighting. 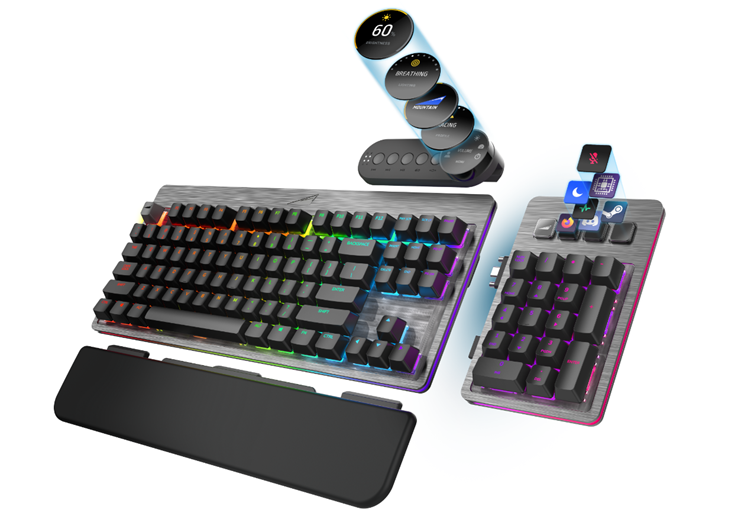 Everest is being released in three versions: Everest Max, Everest Core and Everest Core Barebone, all of which are available to pre-order. The Everest Core Barebone is the entry-level option, containing the base keyboard without keycaps or switches, giving you the option of adding your own modular switches and preferred keycaps while saving some money.

The Everest Core does come with Cherry MX switches, key caps, spacers for the keyboard’s feet to enable better height adjustment and a 2m USB Type-C cable for connecting it to your PC. Finally, the Everest Max is the flagship version, including the full keyboard, its media dock, display dial, palm rest and all of the other extras.

You can find details on pricing, shipping, and launch dates at Mountain.gg, HERE.

KitGuru Says: We will be looking forward to August and getting to try one of these out for ourselves. Did any of you back the Everest Kickstarter campaign last month? Will you be keeping an eye out for it when it releases later this year?