Over the last decade, Noctua has cemented itself as a key player in the PC cooling industry, both with its air coolers and fans. Now however, Noctua has made the move over to the GPU space, designing a unique graphics card cooler in collaboration with ASUS. It sports two 120mm Noctua NF-A12x25 fans, the classic brown and beige colour scheme, and is even 4.3 slots thick… so let's find out what it is all about.

There's no doubt that the most eye-catching aspect of the ASUS RTX 3070 Noctua Edition is its custom-designed shroud, complete with Noctua's signature brown and beige colourway. We also get full view of two 120mm NF-A12x25 fans, and remember, graphics card fans are usually 100mm across at most, so it's quite something to see two 120mm spinners here. This cooler sits atop the same PCB that ASUS used for the RTX 3070 TUF Gaming, meaning we get a factory overclocked core, increased power limit and dual-BIOS support as well.

One other thing to make clear right from the off is that we are not calling this a ‘review.' KitGuru reviews include a discussion on pricing and offer concrete buying advice – two things that are lacking from this analysis as we simply have no idea as to how much these cards are going to cost in the real world, and we all know what graphics card availability is like in 2021. For those interested, think instead of this as a technical examination of a Noctua graphics card cooler, rather than a review that tells you whether or not you should buy one. 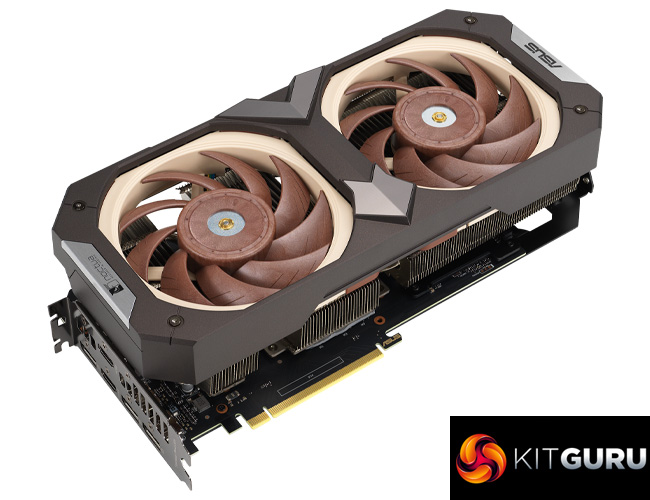 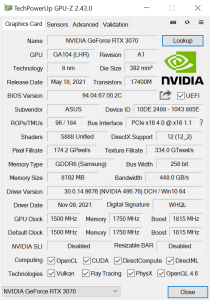 It's been quite a while since we last reviewed a vanilla RTX 3070, so it is worth re-capping the core spec. At the highest level, the 3070 uses Nvidia’s GA104 GPU, though unlike the RTX 3070 Ti, it is not fully populated. Here, GA104 incorporates 46 Streaming Multiprocessors (SMs), and thanks to Ampere’s new SM structure with its two FP32 datapaths, each SM houses 128 CUDA cores, giving RTX 3070 a total of 5888.

As for clock speed, ASUS offers a choice of dual-BIOS. The Performance BIOS runs slightly faster at 1845MHz, compared to 1815MHz for the Quiet BIOS. In terms of memory, we find 8GB of 14Gbps GDDR6 memory, operating over a 256-bit bus, for total memory bandwidth of 448 GB/Sec.

Lastly, for total graphics power, ASUS has increased this by 20W compared to reference spec, with both BIOS targeting a 240W TGP.