Since our first EKWB direct die cooling video was published a few months ago, EK and ourselves have been inundated with comments asking – where is part 2?! Well, today is the day that we get a chance to take a look at what EK has been brewing up, with three new Intel Alder Lake 12th Gen Delid/Direct Die cooling kits. Today we take an exclusive look at the early prototype samples.

Several months ago we started a project aimed at delidding and direct die cooling the Intel Core i9-12900K CPU. Initially, this was planned to be a DIY attempt at direct die cooling, however, when EK Water Blocks heard about our plans they were quick to offer a professional helping hand. EK asked if we would like them to design a custom block that would make direct die cooling the 12900K easier, naturally, we welcomed their help.

KitGuru teamed up with EK to investigate the potential benefits of direct die cooling for Intel's Alder Lake CPU's, in order to achieve the best possible thermal performance on a daily basis. After publishing the first video announcing this collaboration EK was overwhelmed by the response of KitGuru's audience. In order to bring these products to market EK reached out to der8auer, a renowned expert in delidding and direct die applications. Together we are now testing and validating specialised water blocks, die guards and delidding tools to deliver a safe, reliable and cool package to enthusiasts like us.

In the first video, we measured the thermal performance of the 12900K in its stock form with the original IHS using a standard EK Velocity² water block. Owners of the 12900K will know that it’s not the easiest CPU to keep cool, even with custom water cooling the CPU will reach temperatures of up to 90°C and beyond, especially if the CPU is being overclocked. Our aim is to significantly improve the thermal performance by using a direct die cooling solution.

Also in the first video we showed how to delid the CPU (remove the stock IHS) using a readily available delid tool from RockitCool, as at the time of publishing, EKWB didn’t have a delid tool available. Due to the huge amount of interest from viewers of the first video, EKWB is now planning on launching several new products which we take an exclusive look at in this video.

EK-Quantum Velocity² ILM Replacement – 1700 Upgrade Kit – Expected to resolve most mounting inconsistencies without voiding warranty. Similar to recent Thermal Grizzly and Thermalrights products featuring machined plate that replaces the stock ILM with the addition of a backplate that replaces the stock solution to strengthen the motherboard. Compatible with all existing LGA 1700 Velocity² and Momentum² parts.

EK-Quantum Velocity² Direct Die – 1700 Upgrade Kit – Utilising the same backplate as the ILM replacement kit and supplied with a custom die guard and coldplate that converts existing LGA 1700 Velocity² water blocks to direct die, including Velocity² Lignum, Velocity² DDC (coming soon) and any Momentum² Z690. Supplied with conductonaut TIM and a pre-cut low adhesive plastic that fits perfectly around the die covering the PCB up to the inside edge of the die guard.

You can see in the video that we came across an issue with the first prototype sample, during installation the water block cold plate would foul on the CPU guard frame before enough mounting pressure was applied to the CPU die, which meant the system would not POST. EKWB is planning a revision of the water block to combat this issue but for now, grinding down the surface of the CPU guard was a temporary resolution to the problem. 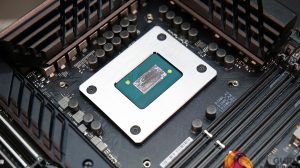 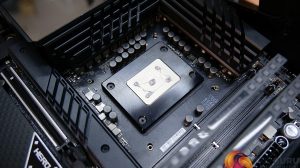 By removing material from the surface of the CPU guard we were able to get the system to POST but were still unable to load our previous BIOS profile with XMP enabled, so there is still a potential issue with CPU mounting pressure. However, by using Thermal Grizzly Conductonaut liquid metal TIM we saw a significant reduction in CPU thermals.

We will await the delivery of the revised CPU water blocks from EK before publishing any official performance results but we can already see the potential benefit direct die cooling will have on the 12900K and hope that not only does the revised water block provide an overall lower CPU load temperature, but also produces a more consistent temperature across all cores.

KitGuru says: The prototype version of EK’s direct die kit gives us an early idea of what potential is available to be unlocked from Intel Alder Lake CPUs, we just need to wait a few more weeks for the revised versions to see exactly what performance improvement is achievable.

Previous Bungie will unveil Destiny 2: Lightfall in August
Next Ubisoft has delayed Avatar: Frontiers of Pandora