Hot on the heels of our RTX 3080 Ti review, today we are back with a look at Nvidia's RTX 3070 Ti. While the core-count has only slightly increased from the RTX 3070, the RTX 3070 Ti is able to deliver a 36% increase to memory bandwidth thanks to its use of GDDR6X memory, instead of the slower GDDR6 modules found on the original model, we put this new GPU through its paces to see what sort of performance it can offer. 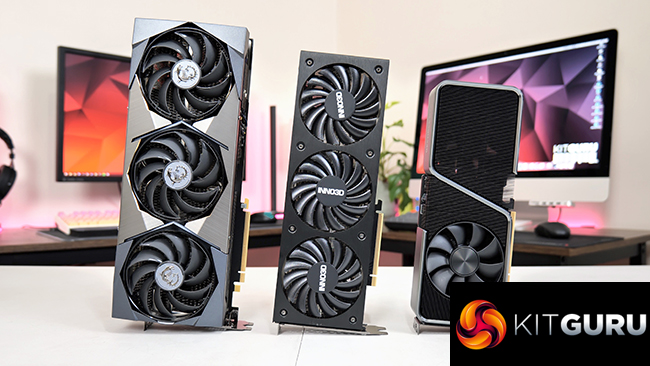 Ampere also places one RT core and four Tensor cores in each SM, giving a total of 48 RT cores and 192 Tensor cores. This is accompanied by 192 texture units and 96 ROPs which are now housed directly within each graphics processing cluster (GPC), with 16 ROPs per GPC, and 6 GPCs in total for RTX 3070 Ti.

Clock speed is another area where Nvidia has tweaked things compared to the vanilla RTX 3070. The RTX 3070 Ti Founders Edition has a reference clock of 1770MHz, an increase of 45MHz against the RTX 3070, though both of the partner cards we test come factory overclocked. We test real-world clock speed behaviour later in this review.

For the memory, this is where we see the biggest upgrade versus the RTX 3070. While we still find the same 256-bit memory interface, in place of the slower GDDR6 modules of the RTX 3070, Nvidia has opted for GDDR6X memory clocked at 19Gbps. This offers total memory bandwidth at 608 GB/s, a 36% increase over the RTX 3070.

Lastly, for total graphics power, Nvidia rates the RTX 3070 Ti for 290W, which is a sizable increase over the RTX 3070's 220W TGP, with most of that likely going towards the GDDR6X memory. We are using our new GPU power testing methodology in this review, so read on for our most detailed power testing yet.