The software used for Gigabyte’s Aorus Z270X-Gaming K5 is almost identical to that available for the Gaming 7. As such, we have re-used the bulk of our analysis from that review and updated the text where there are subtle differences. 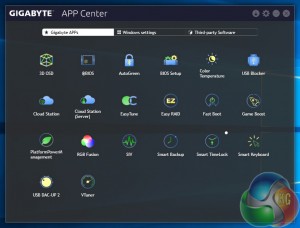 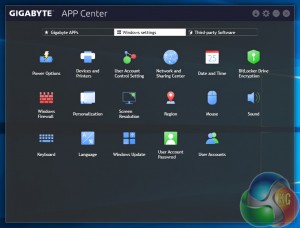 Gigabyte makes a vast number of software utilities available for installation with its Z270 motherboards. Thankfully, not all the tools have to be installed and APP Center is a very good method of managing the selected software, as well as third-party apps and Windows settings. 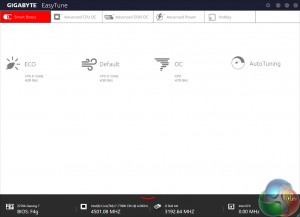 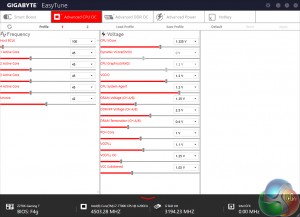 EasyTune is Gigabyte’s tool for managing system operating parameters. The performance profile of the system can be adjusted using EasyTune and there’s also the option to conduct automated system tuning.

Other system settings such as voltages, speeds, and ratios can also be adjusted and saved into profiles.

EasyTune Hardware Monitor break-out tab is an excellent way of reading a wealth of system information while inside the OS. The sheer quantity of information displayed is superb and we confirmed CPU VCore accuracy to be good when tested against a physical multimeter reading.

System Information Viewer (SIV) is a similar setup to EasyTune but it is geared towards fan control and system monitoring. Four fan speed profiles can be selected and manual fan control ability is provided in great detail. An 8-point curve can be set for all the motherboard’s fan headers or, alternatively, an RPM-fixed mode can be applied (which custom liquid cooling enthusiasts may appreciate).

System recordings relating to voltages, temperatures, and fan speeds can also be made. This is particularly useful for analysing stability in the form of checking how your system behaves during an extended gaming or video rendering session, for example.

RGB Fusion is Gigabyte’s in-depth LED control application. The Basic tab can be used to activate different LED operation modes and also tweak the RGB behaviour. I was particularly fond of the Intelligent mode which adjusts the LED colour profile based on statistics such as the CPU temperature or load, the LAN speed, or even a time schedule.

The Advanced section gives a greater degree of LED control, allowing users to adjust the lighting colour and behaviour for the board’s numerous individual zones (and RGB header). The Z270X-Gaming K5 differs to its Gaming 7 brother in its ability to only change the single colour applied to each of the board’s lighting zones, not individual colours for individual zones. The RGB strip can, however, be set as a different colour to the motherboard. A calibration tool is available for Gigabyte’s unique 5-pin RGB header, allowing greater compatibility on the fragmented RGB LED strip market.

Three individual LED profiles can be saved and they can be exported/imported to share with friends or for backup purposes. RGB Fusion has the ability to control the LED profiles of partnering hardware such as an RGB-enabled graphics card.

Focussing on some of the more useful tools, 3D OSD is a RivaTuner-like application that can be used to overlay system information on the screen. I don’t see the need for this feature when RivaTuner is freely available alongside MSI Afterburner but it may prove useful for some people, nonetheless.

HomeCloud is a tool for allowing other devices to access your system’s files. Color Temperature can be used to adjust the blue-light profile of one’s monitor. I tested this feature with a basic BenQ G2222HDL monitor and it worked well.

@BIOS makes up for limited UEFI-based updating methods with an ability to update the BIOS from an online server. BIOS information can also be used and the profile can be saved, both of which are useful troubleshooting and general usage features.

As the name suggests, EZ RAID is a simple tool for creating a software RAID array inside the OS. USB DAC-UP 2 can change the settings of certain USB ports in order to suit a user’s preference with their audio hardware.

Gigabyte’s variety of available software tools is superb and the system for managing them through APP Center is smart and efficient.

RGB Fusion is excellent and gives users a sizeable amount of flexibility for tuning their system’s lighting conditions. The LED-adjusting tool is actually as good as ASUS’ AURA software in general, and better in some respects (re-mappable RGB header pins, and the Intelligent RGB modes).

It’s difficult to find criticism for Gigabyte’s selection of OS-based software. Perhaps the only negative point that strikes me is that the apps border a little on the resource-heavy side and seemed to have a minor effect on performance numbers. Oh, and some form of RAM drive software tool would have been a nice addition.