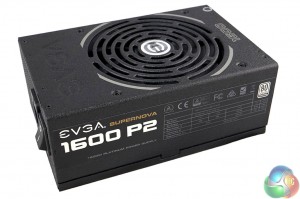 The SuperNOVA 1600 P2 is another serious and mean looking EVGA powersupply. The matt paint work is rough to the touch and as such won’t attract fingerprints easily. Labels on the side detail the specifications and capacity. We will look at this shortly.

Like the 1200 P2 which we reviewed last week, the finish of the chassis is superb. It passed our ‘screwdriver’ test without a problem. This involves running the head of a Philips head driver down the side of the chassis with light to medium force. After all, how many times have you accidentally connected with a power supply during a system build? 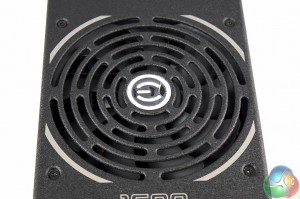 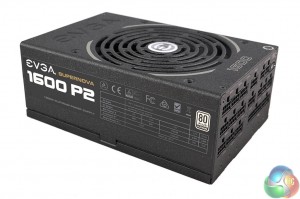 The large fan is hidden behind the thick grill system which is cut into the chassis itself. The EVGA ‘E’ logo is visible in the center of the chassis. The fan underneath is 140mm, and we will take a closer look at the model when we open it up shortly. 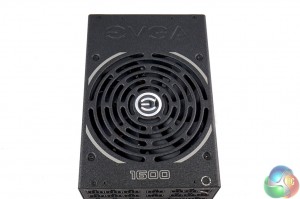 It may be difficult to see in the photos, but we like the small attention to details, such as having the ‘EVGA’ text cut into the chassis. 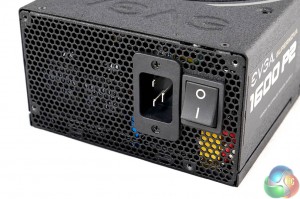 At one end of the power supply is the power connector and switch. A large vented surface is cut into the case to help ensure plenty of air flow. 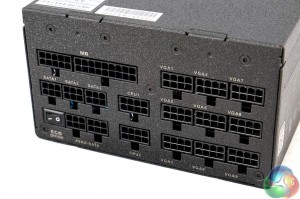 As you would expect there are no shortage of connectors on the modular bay section. All of these are clearly labelled and easy to follow, even for a relatively inexperienced builder. An ‘ECO’ switch is also positioned in the bottom corner. This allows the user to toggle the ‘semi passive’ option on and off. Regular readers may remember that the 1200W P2 had the ECO switch positioned above the power connector on the other side of the supply. 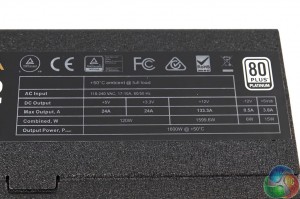 The single +12V rail can deliver 133.3A which is a crazy amount of power! With this kind of juice on tap there would be no problems powering even two overclocked AMD R9 295X2. Our previous review of the OverclockersUK Infinity Vesuvius system highlighted that two R9 295X2 cards could demand close to 1,200 watts under load.