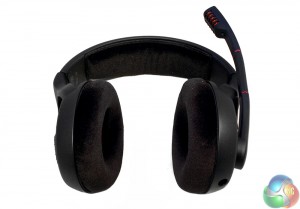 For such an expensive gaming headset, you might expect the Sennheiser PC 373D to have big RGB lighting, some giant styling features and be big, brash and loud – but that is not the case at all. It is very understated, with a matt black paintjob that covers almost all extremities and only a little bit of red styling here and there.

It is not even made with exotic metal or anything that fancy. It is a plastic framed headset. It feels sturdy and flexible, but not unbreakable. Be careful twisting the frame too much. I would want to bring a carry case with me if I was travelling with these. Not because they are fragile, but because when you are spending this much, if they are not made of cast iron you want a bit of added protection. 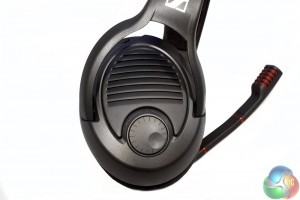 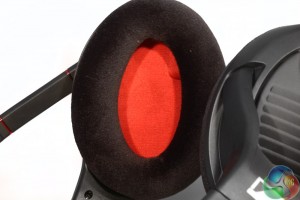 The ear cups on this headset are matt black, just like the rest of it, with some perforated grills which let air circulate so you do not overheat while wearing these cans. On the right hand side, there is also a volume wheel, which is easy to find while the headset is in use and gives you manual volume control without the need for a weighty in-line remote.

Inside you have velvet earcups, which are very sort to the touch, with a red interior that does give the headset a little bit of style out of the mass of black.

The ear cups have some movement to them, like the headband does, meaning it should be easy to get them in the right position when on your head. There is also plenty of space inside the earcups, which makes fitting them over your ears a cinch. 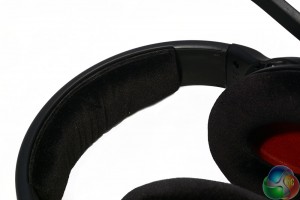 The headband is similarly well padded, offering a thick and comfortable band of material to rest on your head. It also has plenty of give, so this headset should fit those with even the largest of heads. 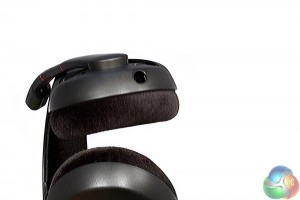 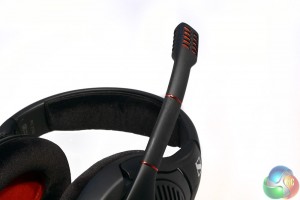 The left hand ear cup has a 3.5mm connector for the audio cable, which lets you plug just the standard cable in for straight 3.5mm audio, or attach the additional Dolby surround sound adaptor which outputs to a standard nickel plated USB connector.

Alongside that hole though, you will find the microphone boom. This is hard-attached, so is not removable. But it can be rotated to and from your face to give you some customisation on placement, or you can move it out of the way if you do not need it at the time. 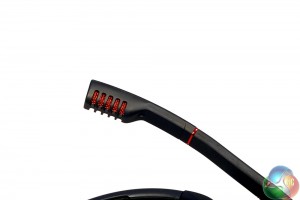 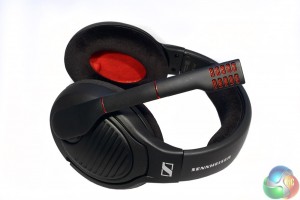 The microphone itself looks particularly cool, with some red, anodized aluminium bands along its length and on the mic-input. It looks so good, I wish there was some more of it at certain spots around the headset to make it stand out a little more.

Like most game studios, the team behind Baldur’s Gate 3 has faced various setbacks this …