AMD to bundle Civilization: Beyond Earth with select GPUs

AMD has announced that it will begin bundling Civilization: Beyond Earth with select R9 series graphics cards in addition to the gold ‘Never Settle' rewards code. Those who purchase an R9 290, R9 290x or an R9 295×2 will not only be able to choose three games from the Never Settle selection, but also receive the latest title in the civ series.

This comes just a few days after Nvidia announced its own graphics card game bundle, which lets users choose between Assassin's Creed Unity, Far Cry 4 and The Crew when buying select GPUs. Civilization: Beyond Earth is the latest game available that makes use of AMD's Mantle API, which allows low level hardware access for greater in-game performance. 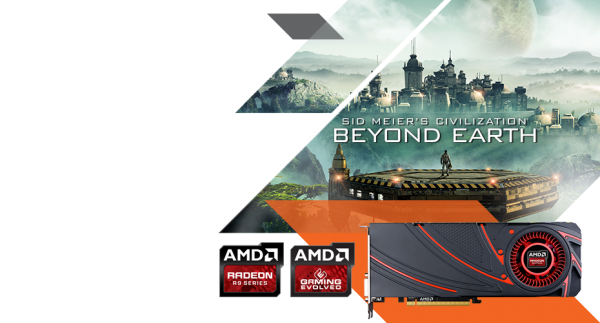 If you happen to have a code already then you can redeem it, HERE. The availability of this offer will depend on region, availability and retailer participation.

Civilization: Beyond Earth takes on a science fiction oriented theme, previous titles in the series have focused on world history and even pirates.

KitGuru Says: AMD does tend to pack in a lot of value with these bundles. Have any of you guys played the new Civ game yet? What do you think so far? Did you see an improvement with Mantle switched on?