AMD’s latest Threadripper 2990WX is a powerhouse at its default 4.2GHz boost clock speed, but that hasn’t stopped overclockers from putting the processor through its paces. Thanks to the use of liquid nitrogen, IvanCupa has managed push the chip as high as 6GHz.

Last week, we saw overclockers achieved an unprecedented 5.1GHz across all cores of the new AMD’s Threadripper 2990WX, a feat usually only achieved via a single core on other platforms. While this record has yet to be topped, IvanCupa has managed has pushed the chip’s single core performance to 5.955GHz. Upon validating the CPU-Z record, it can be seen that the majority of cores run at 608.21MHz, with core #24, #26 and #27 hitting 2646.86MHz.

The Indonesian overclocker’s benchmarking platform consists of MSI’s Meg X399 motherboard, a single stick of G.Skill’s 8GB DDR4 RAM, Nvidia’s GeForce GT 730 GPU, a HyperX 240GB SSD and a 1500W Corsair power supply unit, according to IvanCupa’s HWBot entry. Of course, none of this would be possible without a bulky LN2 cooler. 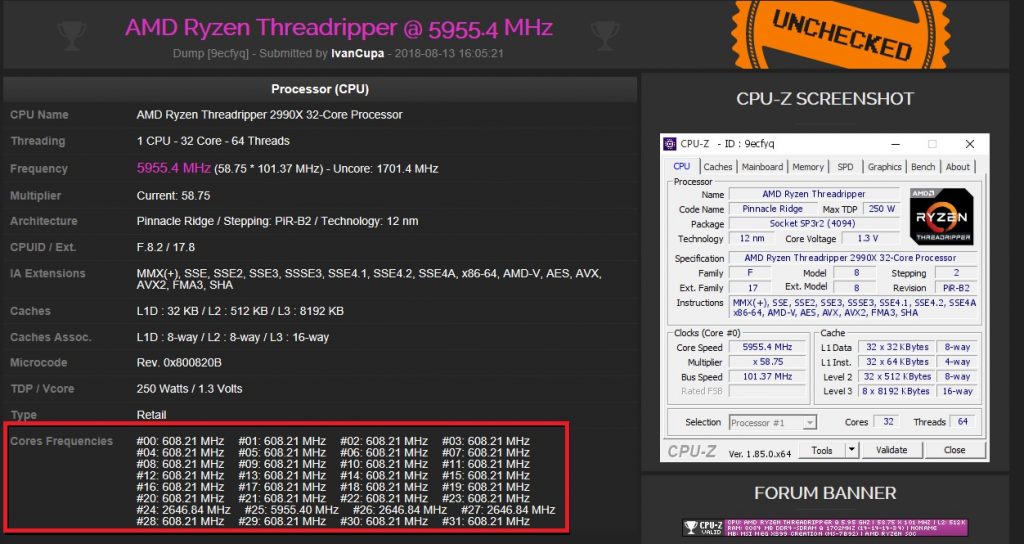 Although Intel has yet to top AMD’s 5.1GHz lead across all cores, achieving just 5GHz across its 28-core chip demonstrated at Computex, Team Blue has already broken the single-core 6GHz barrier with its 7th generation Kaby Lake-X Core i9-7900X, once again using liquid nitrogen.

Despite these records not holding much value regarding real-world in-app performance, each feat is a testament to the raw power the £1,600 Threadripper 2990WX has under its belt. Fortunately, users of AMD’s X399 chipset won’t need to shell out for another motherboard on top of the cost of the processor.  If this too much, however, AMD will be unleashing its $899 (£695) 16-core Threadripper 2950X at the end of August, followed by a 12-core Threadripper 2920WX and 24-core Threadripper 2970WX later in the year for $699 (£550) and $899 (£707) respectively.

KitGuru Says: No doubt IvanCupa will be knocked off the top of the leaderboard in the coming months as more overclockers adopt the Threadripper 2990WX and push it to its limits. Hopefully Intel catches up on the enthusiast front with its 9th generation.