These are the fastest ever recorded frequencies for memory with CAS 6 and CAS 7 and they were achieved by the renowned over-clocker Benjamin Bouix aka ‘Benji Tshi’ and Jean-Baptiste Gerard aka ‘Marmott’, using liquid nitrogen as cooling aid. The sessions were run on a GIGABYTE P55 UD6C (bios F10) with an Intel Core i7 870 processor.

“This is the first time we have overclocked this module and the speeds achieved are very impressive,” said French over-clocking champion Jean-Baptiste Gerard aka ‘Marmott’. “HyperX KHX2544C9D3T1FK2/2GX has the potential to go even faster but unfortunately we were restricted by CPU performance. We can’t wait until the next OC session to beat our own records!” 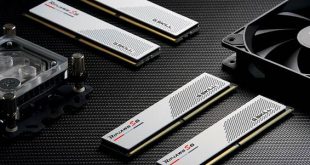 This month, G.Skill has been announcing its plans for the upcoming launch of DDR5 memory. …