Update: It seems that false reports have been circulating the internet claiming that BattlEye released data showing 99 percent of hackers on PlayerUnknown’s Battlegrounds were from the Chinese region. The anti-cheat firm has gone on to confirm that it has said no such thing and that the information has perhaps been mistaken for something creator Brendon Greene has said instead.

As I originally expected, the information reported by Youxi Story might have been a little blown out of proportion, as the only details released by BattlEye pertaining to the scale of cheaters coming from China specifically has been this Tweet. Instead, the anti-cheat maker suggests that the percentage might have been confused with something said by PlayerUnknown himself in this podcast.

Regardless of where the information might have come from, it still remains dilute and unconfirmed. While there might be a sizeable portion of the hackers coming from China, it seems more like news to fuel the fire of hate surrounding the lack of progress developers have seemingly made concerning the problem. Still, Bluehole and PUBG Corp are hard at work on minimalising the damage and ensuring the game remains fun for its players.

Smash hit battle royale game PlayerUnknown’s Battlegrounds has hit a whopping 30 million sales on PC alone, less than a year after its initial release. Unfortunately, its concurrent players have dropped by around 5 percent, sparking conversation about the title’s future.

Hitting the 30 million sales milestone, as shown by SteamSpy, is no small feat and it’s something that very few games get to achieve throughout their lifetime, let alone less than a year of release and just two months after launching its full version.

In fact, the staggering growth of PUBG is likely the reason for its sudden decrease in concurrent players, as it’s impossible to maintain at its current rate. Another reason attributed to the decline is Bluehole’s new anti-cheat measures finally yielding results, cutting out an unwanted chunk of the community thanks to BattlEye and its own in-house systems. 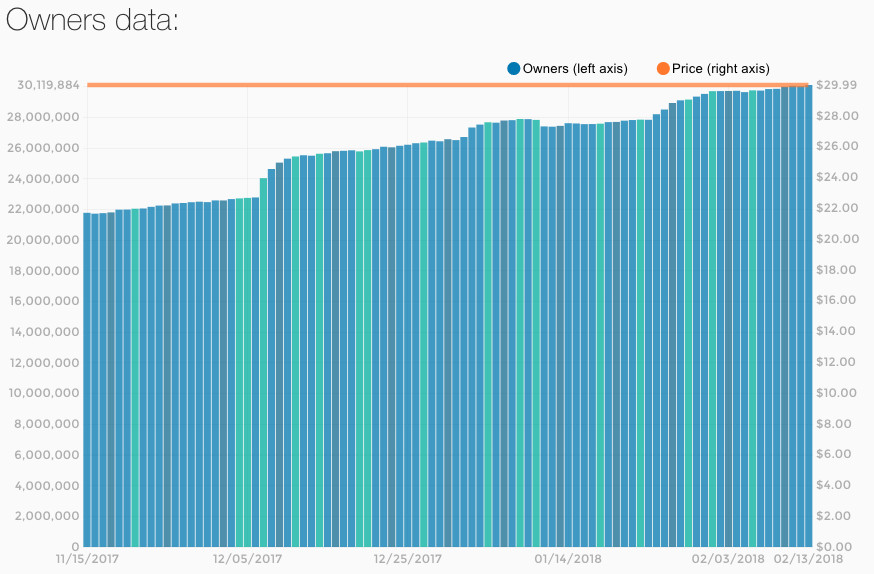 Adding fuel to the fire, Youxi Story reports statistics showing that 99 percent of cheaters do, in fact, come from China alone, and that 45 percent of all PUBG accounts are tied to the region. The site sources BattlEye regarding its numbers but nothing publicly release by the anti-cheat software confirms these percentages. BattlEye has previously gone on record to confirm that the majority of cheats do tend to originate in the country, however.

Regardless, Chinese publisher Tencent states that introducing a server into the region will quell these problems further, with the use of plug-ins if the problem is particularly bad.

Despite its drop in players, PUBG still maintains a healthy 1.5 million average concurrent players and peaks above 3 million. This is more than the remaining 9 of the top 10 combined, so it’s safe to say that PlayerUnknown’s Battlegrounds is far from slowing down.

KitGuru Says: I’d personally expect concurrent players to slow down a little further, considering most games tend to calm a little within their first year. That being said, PUBG is no ordinary title, having conquered so many milestones that it’s difficult to keep up with. Do you think the developer has made much progress on banning cheaters? Have you stopped playing PUBG?