Last night during the Square Enix Presents showcase, the publisher announced its future plans for Marvel's Avengers. For the first time since launch, Crystal Dynamics has put out a roadmap, detailing the content we can expect over the next six months, which includes a Black Panther expansion.

Marvel's Avengers did not get off to the best start, with technical issues plaguing the multiplayer and a lack of meaningful content updates to keep players coming back. That will start to change this year, with a six month roadmap detailing new content updates all the way through Summer 2021. 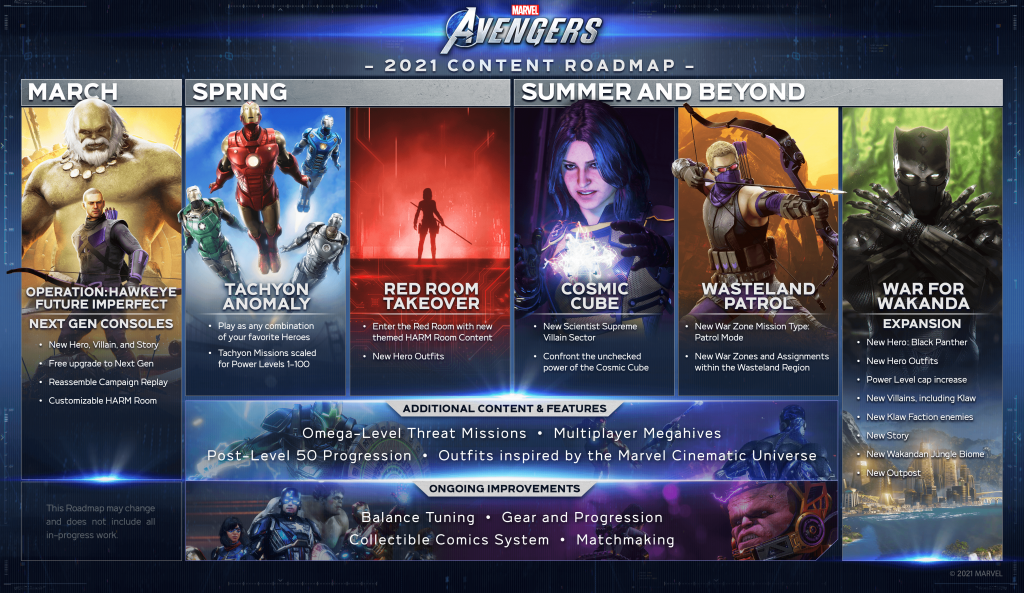 The roadmap starts with last night's Hawkeye update, which includes a new campaign called ‘Future Imperfect'. Over the Spring, we'll be getting the ability to play missions as any combination of heroes and Tachyon Missions with scaled power levels to give players something to grind out. Following that, there will be the Red Room Takeover update with new HARM room content, a new villain sector focusing on the Cosmic Cube and a new War Zone missions, including patrols and wasteland assignments.

Once all of that is out of the way, the next big thing players have to look forward to is the War for Wakanda expansion, which brings Black Panther to the game, increases the level cap, adds the Wakandan jungle to the game and features a new story.

Interestingly, Spider-Man is not part of the current roadmap, so the PlayStation exclusive character has seemingly been delayed and may not arrive in 2021 after all.

KitGuru Says: At this point, it is quite clear that Marvel's Avengers should have been delayed six months, but hopefully this roadmap and expansion will help breathe some new life into the game. What do you all think of the new Avengers roadmap? Will you be jumping back in for the Black Panther expansion?