The goat from Goat Simulator may end up in Dota 2

We might end up seeing the goat from Goat Simulator as a character in Dota 2 thanks to the Steam Workshop voting system. The goat would become a custom courier in the game, the mod is being backed by Coffee Stain Studios, the team behind Goat Simulator.

The developers are hoping to get their goat added to Dota 2 as a custom courier and are encouraging people to vote. In order to be implemented in to the game, the Goat would need to get enough votes from the Steam community on the Goat Simulator courier page. 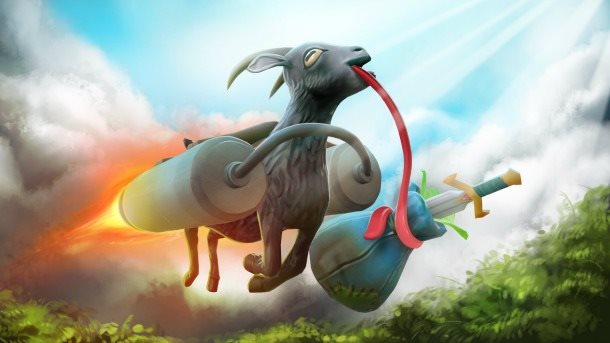 Considering Goat Simulator’s popularity, it is likely that the mod will make it through with enough votes fairly easily. In the preview video, the goat is shown with a long tongue wrapped around a gift bag, it also has the ability to fly upside-down with a jet pack.

The last big custom courier set to be voted in to Dota 2 was actually Gabe Newell himself. You can vote for Goat Simulator, HERE.

KitGuru Says: Goat Simulator became very popular after its release so Coffee Stain Studios probably won’t have any trouble getting the votes to be implemented in to Dota 2.

Previous We might get our first proper look at Star Wars Battlefront next month
Next AMD Radeon R9 390X to feature 8.6TFLOPS performance, 8GB HBM memory