It looks like Huawei has been using some questionable tactics in order to promote the US launch for its new Mate 10 Pro smartphone. The new phone is set to launch in the US next week without the help of any carriers. So in order to give it a bit of a promotional boost, the company ran a competition, encouraging US residents to head to the phone’s Best Buy page to post fake reviews for a chance to ‘beta test’ the device.

Reviews for the Huawei Mate 10 Pro began popping up on the Best Buy listing the day the company announced its Facebook competition. The promotion offered the chance for nine people to beta test the upcoming phone. To enter, people had to post reviews to the Best Buy listing weeks before the phone’s release, with no actual hands-on testing or knowledge. Around 108 reviews were posted over the course of the competition, many of them containing five-star ratings.

It is presumed that Huawei chose to do this in an effort to bolster the general rating of the phone prior to release in order to get more people to buy it. Though, it is worth noting that Huawei never explicitly asked for five-star reviews. Since Huawei does not have the backing of AT&T, Verizon or T-Mobile for this launch, the company is heavily relying on word of mouth to sell this phone in the US. Currently, over 90 percent of smartphones in the US are sold through carrier channels, putting ‘unlocked-only’ devices at a disadvantage. 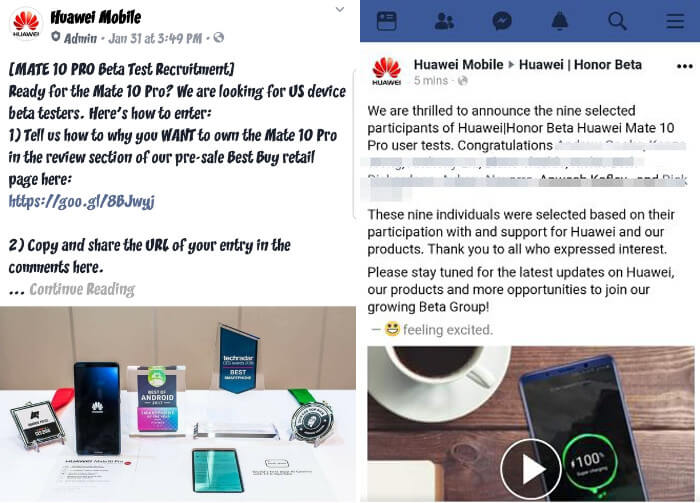 9to5Google managed to snap a screenshot to immortalize the mishap, despite Huawei removing the original Facebook post.

Most of the reviews cropped up exclusively on the Best Buy website after the competition was posted on January 31st, and has since been whittled down from 108 to 73. While this could be Best Buy’s doing given that many of the reviews violate its policy against “advertisements, ‘spam’ content and offers,” the removal of a lot of the reviews is likely down to Huawei itself, as it attempts to rectify the mistake.

In a statement, a Huawei spokesperson claimed that many of these reviews were from genuine beta testers that simply did not disclose that they were part of the program:

“We believe there is confusion around a recent social media post reaching out to recruit new beta testers. While there are reviews from beta testers with extensive knowledge of the product, they were in no way given monetary benefits for providing their honest opinions of the product. However, we are working to remove posts by beta testers where it isn’t disclosed they participated in the review program.”

Huawei isn’t done yet as there are still plenty of reviews up that don’t belong there, however the remaining ones at least state their lack of hands-on experience and remain transparent. The scoring has also been brought down by a handful of one-star reviews that explain this story, however this could upset the balance once Huawei has completed its task of ridding the fake reviews.

KitGuru Says: Nowadays, with the increasing cost of technology, it’s important to always check the contents of the reviews alongside the score given and the amount of people who have participated in reviewing. Research is key to consumer happiness, especially now that a lot of companies are making mistakes and apologising for them later at the expense of customers.