The device itself is a standard 5.25″ width design, and is more or less the same length as a DVD drive.

On the right-hand side of the device, there are two eject buttons, one each for the 3.5″ and 2.5″ drives.

Below this there are two LED indicator lights, to show both power (green) and data activity (red) for both drives.

On the left-hand side there are two power buttons, allowing you to turn on just the 3.5″ drive, or just the 2.5″ drive or both. They have aligned these buttons with the drives so it’s clear to work out what they do.

ICY Dock haven’t fully covered the device, and so you can see where the HDD’s slide into, and how the eject mechanisms’ work.

The back of the unit is very simple, and has 1 x SATA power connector and 2 x SATA data connectors. They have also added a grill so that some air can circulate around the HDD’s.

The device has two layers, at the bottom there is the 2.5″ bay, and on top of this the 3.5″ bay. As such there are two sets of data and power connectors.

The bottom of the device contains another grill to aid with airflow over the HDD’s. 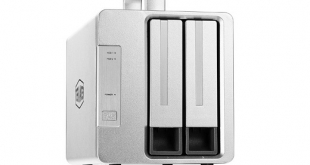