A new set of headphones have been released which will feature a capacitive touch control interface on the surface of the cable.

Many headphones already feature a control box on the cable, but this can often be bulky and can add to the overall weight of the product. Californian based Accidentally Extraordinary want to change this and are releasing a new set of headphones which feature controls built into the surface of a capacitive cable.

Kunal Dalal spoke with Gizmag and said “I was just about to go to sleep while listening to music and I started getting annoyed that my headphone buttons located on the right cable kept getting in the way, Long story short, I thought about how easy it could be to wrap flexible touch electrodes directly on the cable of the headphone, get rid of this remote/mic housing and create a sleek, asymmetrical look to earbuds and headphones.”

Development started in September last year and Dalal took the concept to the Eureka part section of CES. He received some useful feedback and positive comments from both press and public.

Gizmag say “The AE design centers on nano-carbon graphene touch sensors that are printed directly onto the surface of the cable using graphene-based Vor-ink. In much the same way as existing in-cable controls, this flexible and durable touch strip will allow users to play/pause or skip tracks with a tap/double tap, but will also change volume with a swipe of the finger.

The design features swipe-to-turn-on and lock functionality, though the strip won’t be accidentally activated by inanimate objects. While the prototype images show the red touch section flanked by slightly bumpy metal strips, the whole interface will be flush with the rest of the cable in the production models.

Users will also be able to customize touch commands and gestures using a smartphone/tablet app (in a similar way to the Jay One Plus headphones). AE has confirmed that a built-in microphone is planned for inclusion some time in the near future.”

Read more over here and from the source website here. 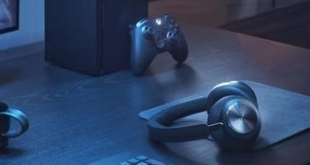