The Leap Motion controller has already been released in America, but it hits UK shores on the 29th July. Amazon UK are taking pre-orders right now, with the price set at £69.99 inc vat. The device is said to support both PC and Mac operating systems.

The device allows people to control their computers by using natural hand movements, detecting both hand and finger movements. They have also released an Airspace store which includes applications specifically designed for use with the controller.

As mentioned the product supports both PC and MAC computers, but it needs a relatively new system. Mac users should be running OS X 10.7 or later and a PC should be running with a Core i3 or AMD Phenom II or better with 2 GB of ram and Windows 7 or Windows 8.

ASUS are linking in with the company to embed the sensor into their high end laptops and All In One systems.

The company claim the sensor can track movement in both hands and all fingers with up to 1/100th millimeter accuracy with no noticeable latency.
[yframe url='http://www.youtube.com/watch?v=3b4w749Tud8′]

If you are interested, head over to Amazon to place a pre-order. The product will be delivered to the end user on the 30th July.

Kitguru says: A radical new product which may change the way we use our computers. Or maybe not. 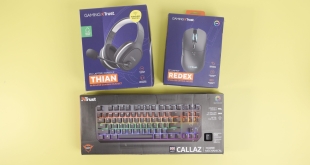