MSI’s latest gaming laptop, the GT80 Titan , has leaked ahead of its impending announcement. This is the first laptop in the world to incorporate a fully mechanical keyboard, built by SteelSeries with Cherry MX Brown switches. Additionally, the laptop is shaping up to be quite the power house as it will feature Nvidia’s GTX 900 series mobile graphics chips, which are fairly impressive.

Unnamed sources speaking with KitGuru have revealed that the GT80 Titan will be available in a GTX 980 SLI configuration, making for some serious gaming horsepower under the hood. The maximum RAM intake will likely be 32GB and storage will be provided by an SSD along with a standard mechanical hard drive for mass storage. 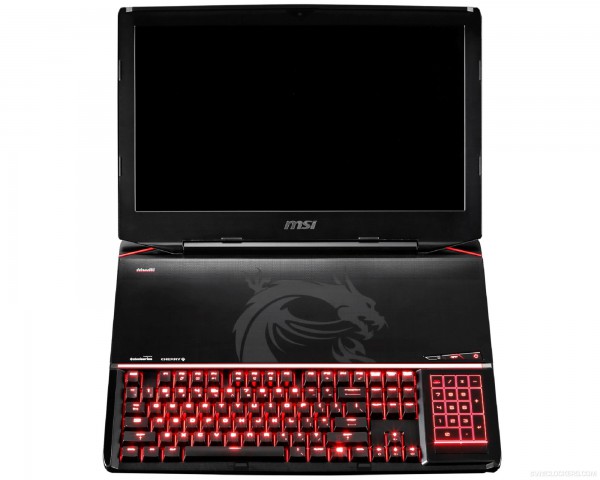 As you can see, a compromise has to be made in order to incorporate the mechanical keyboard. The extra space between the screen and keys is required to fit all of the hardware inside, leaving less room for wrist space.

To the right of the keyboard you’ll find a hybrid touchpad, which doubles as the trackpad and number pad for the laptop. We don’t know exactly what resolution the 18.4 Inch screen will have but it will likely be a full HD display. The laptop will come in at 49.1mm thick and weigh in at 4.5KG.

Price and exact specifications will be revealed with the official announcement.

KitGuru Says: MSI’s GT80 Titan laptop is shaping up to be quite the powerhouse. What do you guys think about the inclusion of a mechanical keyboard?