AMD is getting in to the virtual reality space with its own development kit called LiquidVR. Rather than creating its own headset, AMD has focused on the software side of things in hopes that developers will be able to make better VR experiences on its own hardware.

At the Game Developers Conference, AMD has said that LiquidVR will allow developers to make virtual reality content with less latency and better performance. There will also be plug and play capabilities for a variety of virtual reality headsets currently out. 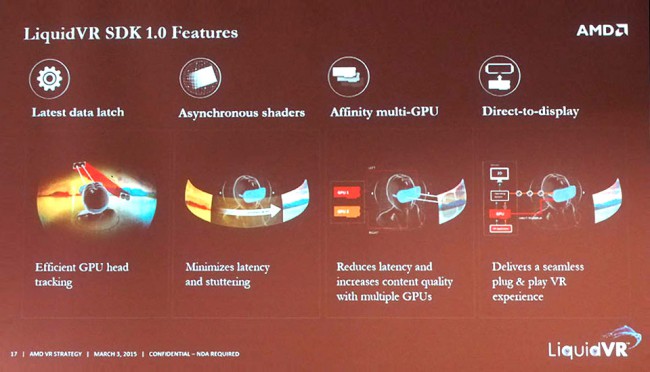 In a press release sent out today, AMD’s Corporate Vice President of Visual Computing, Raja Koduri, said that “Content, comfort, and compatibility are the cornerstones of our focus on VR at AMD and we’re taking a big step in all three areas with the introduction of LiquidVR today”.

AMD has partnered up with Oculus along with various other ‘key partners’ to improve its new software development kit and to get people using it. Apparently AMD’s VR plans run a bit deeper than just LiquidVR but we won’t know more for a little while. An alpha version of Liquid VR is already available for registered developers.

KitGuru Says: Virtual Reality is attracting more and more companies so it makes sense that AMD wants to get in on the action. AMD is no stranger to working with developers to optimize games for its hardware either. What do you guys think about this? Could AMD be successful in the Virtual Reality space?