The Orion capsule that could one day carry humans to the surface of Mars, is set to be tested today by NASA and its developers, Lockheed Martin, sending it almost 6,000KM (3,700 miles) from Earth, to make sure critical components work when confronted with heavy radiation and high re-entry temperatures.

The mission, which will begin shortly after 12PM today, is being described by Lockheed, as a “risk reduction,” mission, whereby it will test some important aspects of the capsule, to make sure that when it eventually does contain live human beings, it will not let them down. A journey to Mars will be a long one, far from Earth's protective atmosphere, making it much more susceptible to radiation, which the capsule must protect against. Similarly, its re-entry heat shield must be capable of withstanding temperatures in excess of 2,000 degrees Celsius. 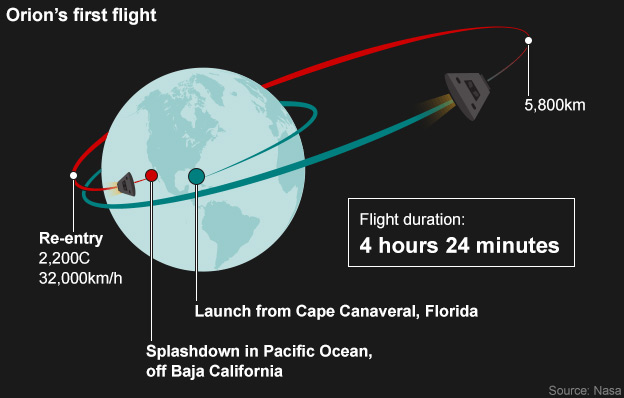 To test these and other facets of the space craft, NASA and co will be sending Orion into orbit around the Earth, aboard a Delta  IV Heavy, the largest available rocket at this time. From there, it will propel itself out to a distance of some 5,800KM from Earth, before re-entering the atmosphere at around 20,000 miles per hour, mimicking the speed that the eventual Mars mission is thought likely to return home at.

As the BBC reports, NASA will also be testing the capsule's parachute system, which would potentially need to operate on Mars as well as back on Earth.

At the time of writing, the Delta IV rocket system is being fuelled with liquid Oxygen and Hydrogen and is progressing ahead of schedule.

Currently, the first manned mission inside an Orion capsule is set to take place after 2020, with the potential for a mission to an Asteroid or the Moon in 2021 and a Mars mission sometime in the 2030s. However there are doubts about whether NASA has the funding to make such an operation happen. It may need to team up with more international resources to help it develop components of the spacecraft, as it has done with the Orion capsule.

KitGuru Says: While this is a totally unmanned flight, fingers crossed for everyone involved.