With its Republic of Gamers brand, ASUS has entered almost every market imaginable from motherboards to graphics cards and CPU coolers to power supply units. Now, ASUS enthusiasts can house all of their components in the company’s first chassis under the label, a mid-tower dubbed the ROG Strix Helios.

ASUS has endowed the ROG Strix Helios with a premium build consisting of a thick, brushed-aluminium frame and a mesh front. This is surrounded by three 4mm-thick, smoked tempered glass panels, two of which are situated on either side to display the system’s internals. The third and final panel hovers over the mesh, with integrated Aura Sync RGB lighting displaying a striking pattern alongside the company’s logo. Each of these LEDs are individually addressable via software or the I/O panel, allowing users to personalise their build.

The ROG Strix Helios is much about performance as it is aesthetic, making room for EATX motherboards, a 420mm radiator at the front, a 360mm radiator at the top and a water-cooling pump and reservoir for full water-cooled builds. Alongside this, those wanting to vertically mount their GPUs can do so with easy. Although a premium tower isn’t exactly going to replace the portability of a laptop, ASUS has made sure to include sturdy removable handles for those that wish to transport their system to LAN and back. 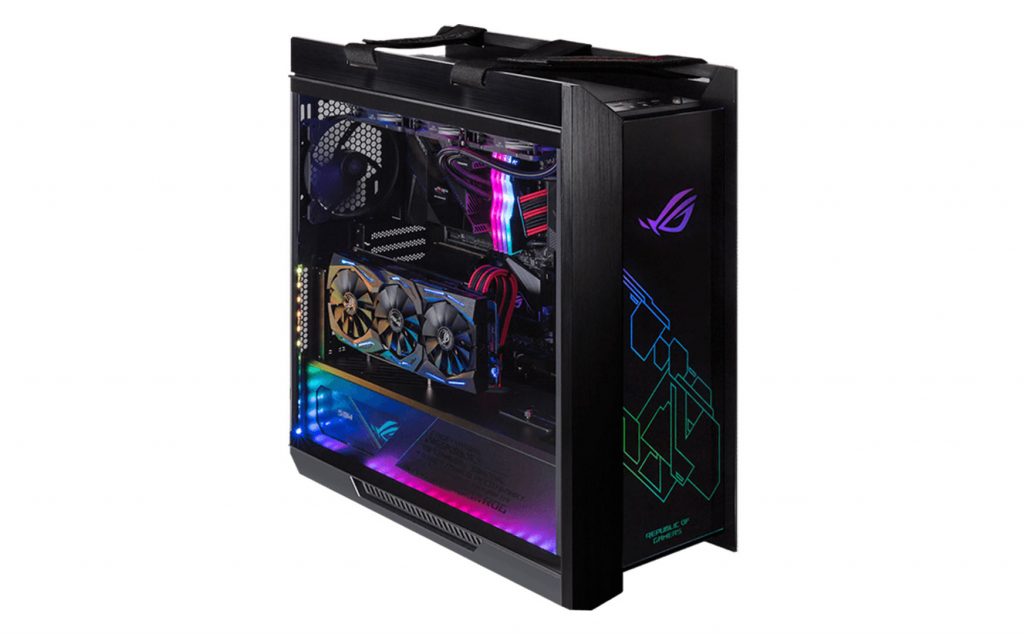 Users can keep their build tidy thanks to an array of cable management systems. Firstly, the two-piece power supply unit shroud allows users to balance cleanliness with aesthetic, perfect for RGB-clad PSUs such as the ROG Thor. Next up is an “adjustable multifunction cover” complete with GPU braces that help to hide wires, support the weight of larger graphics cards and vertically display SSDs or the ROG Aura Terminal. And lastly, the ROG Strix Helios ships with a translucent cable cover that can hide wires seen through the rear tempered glass panel, but still allow RGB components to shine through.

The cherry on top is that the ROG Strix Helios is almost entirely tool-less to construct the build inside. The tempered glass panels eject via release buttons located at the rear and there are fan and radiator mounts housed within the chassis.

KitGuru Says: It’s certainly an expensive case, but I’m quite taken with the design. My only concern is noise, given the mostly open mesh panel at the front, but that would come down to the chosen cooling and fans more than the case itself. What do you think of the ROG Strix Helios?

Previous Nexus 6P owners will finally receive compensation from Google and Huawei
Next Next At Acer: Laptop with a slidable keyboard? ConceptD, new Predator gaming gear and more