From the time the first gamer opened up a cardboard box with an Antec 900 chassis inside, this company has been one of the most popular at LAN gaming events across the globe. The launch of the brand new 1100 series will be welcomed by enthusiasts across the globe. KitGuru gives this new specification the once over, ahead of a full review.

People buy 7-seater vehicles and spend a lot of time driving around on their own. The same with sports cars. While we all love the idea of a 150mph frisky filly, most of us will spend more time negotiating speed bumps than high-speed corners.

And so it is with chassis manufacturers. While the vast majority of people will only ever use integrated graphics or, maybe, add a single GPU to their system – we all love the idea of chaining 4 major graphic cards together and seeing Crysis scores in the +200 frames a second region. It pumps our collective nads.

Antec’s new flagship design will happily accommodate (and keep well ventilated) up to 4 top end graphic cards. According to marketing maestro, Benjamin Perlzweig, “The Eleven Hundred marks a new chapter in the Gaming Series with an all-new attractive design and a revamped lineup of expandability, cooling and convenience features”. OK.

One area of controversy in recent times has been the internal capacity of high end chassis for the 100%-Phat-Boi mainboards, like the EVGA Classification. No problem there with the new Antec Eleven Hundred. It has been designed to give the highest levels of performance – with full support for XL-ATX sized motherboards. According to Antec, this makes the Eleven Hundred the most expandable chassis ever released by the company. Nice.

The Eleven Hundred features default 200 mm top and 120 mm rear fans and mounts for up to seven more fans for advanced GPU and hard drive cooling – including one 120mm intake fan behind the motherboard tray to cool the CPU. Users can also utilize the included fan power hub to connect up to four 3-pin fans to a single Molex for improved cable management.

Emphasizing ease-of-use in a gaming enclosure, Antec has decided to go for tool-less 5.25” and 3.5” drive bays for hassle-free installation. No need to get your knickers or cables in a twist either, given that the company has decided to include up to 36mm of cable routing space and grommet-lined cable routing holes. That should help users (i.e. you lot) organise your builds, while allowing for easy installation of future components. For convenient maintenance, the PSU intake & front air filters can be removed without taking off the side panel or tipping the case. KitGuru recommends that you don;t shower your system in the bath – rather you remove these filters and give them a good scrubbing, separately, before allowing them to dry thoroughly before re-installation. You know it makes sense.

“The Eleven Hundred offers a set of features that will appeal to gamers and mainstream users alike at a very reasonable price point,” said Mafalda Cogliani, Global Marketing Director at Antec. “The Gaming Series has always defined our advancement in the industry, and this case will continue that momentum.”

The Eleven Hundred will reach the leading UK resellers like Scan, Ebuyer, Overclockers and KustomPC, as early as early December. Now that’s early.

You can expect to be asked for around one hundred and nine great British pounds.

More words of wisdom are available on Antec’s own site, here. Also, you can watch this funky little video…

Antec also has Facebook and Youtube pages. Just in case you need more, more, more from these chaps and chapesses.

KitGuru says: Initial thoughts are that the construction looks solid, but the proof of the chassis is the KitGuru Labs noise and temperature testing. Stay tuned for an official opinion! 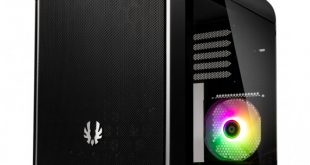