SilverStone released the original LD03 Mini-ITX case about a year ago and it received a generally positive response from reviewers and the ITX audience. However, the one area that generated debate was the lack of airflow to the GPU. SilverStone has now released a new airflow-oriented version of the LUCID LD03 Mini-ITX case, but has the company done enough to remedy the issue? Let’s find out.

The original SilverStone LD03 Mini-ITX case certainly looked the part with a unique three-sided tempered glass exterior giving it an appearance like no other mini-ITX case on the market. Thankfully, SilverStone hasn’t messed with the appearance too much in this new LUCID LD03-AF (airflow) version, it still has those angular tempered glass panels that make it look right at home in most scenarios, whether that is a modern office setting or maybe even next to the TV in your living room, it has the style to pull it off.

Theoretically, the airflow and cooling concept of the original LD03 should have worked very well, and indeed it did in terms of CPU and system temperature due to its cold air intake at the bottom and warm air exhausting from a vent at the top of the chassis, a natural path to disperse heat from a case. However, when it came to graphics card cooling, the LD03 wasn’t perfect. GPU temperature isn’t horrendous using the original LD03 but it is at least a few degrees higher than what we would call optimal.

The reason for this common opinion regarding GPU temperature inside the LUCID LD03 is due to some graphics card being positioned very close to one of the tempered glass panels, strangling airflow to the fans and therefore raising GPU temperature. Fear not, SilverStone claims to have fixed the problem in the new LUCID LD03-AF by simply adding a vent to the tempered glass panel near the GPU, meaning the GPU can now breathe cool air again.

Other than this quite obvious alteration to the exterior and the addition of a USB Type-C port, the LD03-AF is virtually identical to its predecessor. It supports Mini-ITX and Mini-DTX motherboards installed in a vertical orientation with the rear I/O ports located at the top of the case, technically making it a top I/O. This neat package means all cables can be attached to the system in one place and hidden behind the top vent panel. 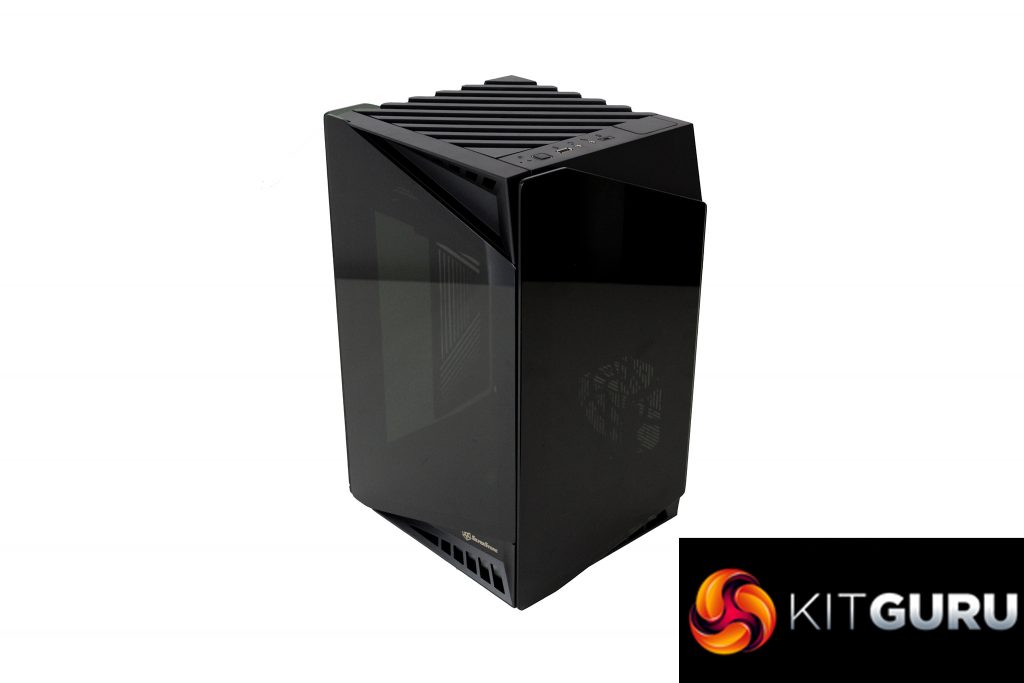 The LUCID LD03-AF comes with two 120mm case fans pre-installed, one in the bottom of the chassis as a cool air intake and one at the top to exhaust warm air. The new GPU vent is simply a cut-out in the tempered glass panel with a removable plastic grill and integrated dust filtration, while still retaining the original CPU and system airflow path and thermal performance.

With its compact vertical stance, the LUCID LD03-AF offers a small footprint so it would leave plenty of space on a desk for other peripherals such as a monitor, keyboard and mouse. SilverStone claims that the case supports the installation of full-size CPU coolers up to 190mm tall, full-length graphics cards up to a whopping 309mm long as well as 2.5-inch and 3.5-inch SSDs/HDDs.

Just like the original LD03, the AF version features a tool-less panel removal solution which SilverStone labels as “advanced engineering with precision manufacturing” as well as quick access to removable dust filters for easy maintenance. An internal volume of 25.2 Litres means the system inside the LD03-AF is powered by an SFX or SFX-L form factor power supply.

Front panel connectivity could be considered conservative with just a single USB 3.0 Type-A port and 3.5mm jacks for audio and microphone at the top of the case, however, there is also a single USB-Type C port located here too as an added bonus. Two PCIe expansion slots located at the top of the case means graphics cards of 2 slot plus thickness can be installed inside the chassis.

During this review, we plan to test how much this new graphics card air intake has affected GPU temperature when the system is under load compared with the original LD03. Unfortunately, we don’t have the original LD03 in the office for direct comparison, so we will have to get creative by blocking the vent to simulate the more restrictive design of the original solid tempered glass panel, which shouldn’t be too difficult with some sticky tape and cardboard…