EATX PC built into the smallest area possible with Cubitek

There’s an old saying that a chain is as strong as its weakest link. The concept is that an entire design can often rest on one thing, no matter how small, because it limits/controls/shapes everything else around it.

This has been turned into a science by the engineers at Cubitek in their search for the smallest/neatest chassis into which an EATX system can be built.

If you like shoving big things in small places, read on.

You’ve decided on a mofo EATX mainboard. You also want a full length 14″ graphic card. Alongside that, your little heart desires to boot off a nice phat SSD drive and then have a pair of 3TB SATA drives on hand for data storage.

Having created your ‘dream specs PC’, you then realise that you live in a shoe box and you only have a small space in which to host your rig. Damn. All that work planning out the system and now there’s no space for it.

No problem… Cubitek to the rescue with the Magic Cube AIO !

With the dimensions of 9.61” x 19.36” x 18.78” (W x H x D), the aluminium constructed Magic Cube AIO is designed to make the most of your slot. Install whatever you like and still walk away with a footprint that a 19th century geisha would be proud of.

The Magic Cube AIO doesn’t waste space, but offers mounting points for one 3.5” HDD and one 2.5” SSD to be placed on top of the 5.25” optical drive cage, while another 3.5” HDD fits below the same 5.25” optical drive cage which is located at the bottom of the chassis. Three more 3.5” HDDs and one more 2.5” SSD can be easily installed behind the motherboard tray. Holy storage Rig Man.

The fact that you can install a 360mm graphics card and have access to all 8 PCI slots at the rear is impressive, but Cubitek doesn’t seem to have scrimped on cooling. The front two 140mm fans, rear 140mm fan and top 140 mm fan (with blue LED illumination) aim to keep your hardware at stable system temperatures. Cooling air can travel, relatively unobstructed. throughout the case thanks to the 19mm space behind the motherboard tray for neat and easy cable management. For even more cooling, the latest CPU coolers with a maximum height of 180mm can be easily installed inside the Magic Cube AIO.

Cubitek is hoping to offer the Magic Cube AIO in the UK for less than £190.

KitGuru says: Admirable effort, but the proof will be in the building (and living with) this tiny chassis.If noise levels and sensible and the air flow is intelligent, this could be a cool option for enthusiasts who want a killer spec in a tiny space. 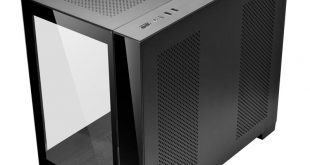 Lian Li has launched a new case as part of the O11D series. Available in …