Whether your taste is more for the original, solid metal Level 10 or the lighter weight GT derivative, you can’t mistake the BMW DesignWorks styling on these cases. Until now. The new version comes in camouflage colours. KitGuru signs up for basic training to investigate.

Many moons ago, a middle of the road Chinese chassis manufacturer called Chieftec, decided to launch a range of colourful chassis with matching keyboards and mice etc. The range was called ‘Dragon’ and almost no one was interested. We were all still very keen on the beige and Chieftec was too far ahead of the public opinion curve to make it stick.

From the mid-90s to now, things have changed. A lot.

If you want uniformity of design, so everyone looks the same, then you go with Apple. In the world of PCs, everyone is looking to make something that no one else has.

For Thermaltake’s TtDesignWorks team, that means going back to existing models and seeing what changes can be made to improve or diversify the products.

With the Level 10 GT, that means ‘go to war’ options. This is what Thermaltake CEO, Kenny Lin, had to say on the new launch.

“Thermaltake began to advocate eSports at the end of 2009. We started in Asia, but then slowly expanded to the rest of the world as we began to realise that gaming is far from a mindless leisure activity”.

So what is it about?  Key explained, “It‘s more about the spirit of constant battle. About challenging yourself to always improve, to always be better. That’s what the spirit of the Level 10 GT Battle Edition is all about”.

“Every event we go to, I see war game fanatics heading into battle and we wanted to create something special for them, something that brings them closer to the battle experience – so the Level 10 GT Battle Edition is completely camouflaged with a unique design that’s perfect for that gaming genre. It embodies the spirit of battle”, said Lin.

KitGuru says: We expect to see this in stores soon. Or not. Depending on whether the camouflage works too well. 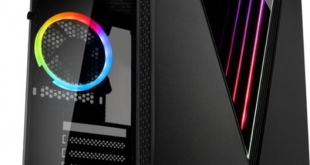