We’ve seen densely packed chassis from SilverStone in the past, but the new Sugo SG09 is taking things to another level and SilverStone has really outdone itself in terms of how much hardware can be packed into a 23L chassis. We’re not going to say that the Sugo SG09 is the prettiest chassis we’ve ever seen, but boy is it functional.

At first glance the Sugo SG09 doesn’t look like much, maybe a larger mini-ITX chassis with an odd looking front. Well, except it isn’t a mini-ITX chassis at all like its most recent siblings, instead SilverStone has somehow managed to fit a mATX motherboard inside the Sugo SG09. Some compromises have been made and some interesting design solutions were taken.

For starters, pop the front off and you’re greeted by the PSU fan, as the PSU is mounted vertically in the front of the chassis. There’s still room for a slim-line optical drive for those that still feel the need of using disc based media. Taking the Sugo SG09 apart further and things get really interesting, as the right hand side, the top and half of the left hand side is all one sheet of metal that comes off. The rest of the left hand side wraps down around the bottom of the chassis to give some additional room to work inside it.

That small L-shaped piece of metal is home to a single 120mm Air Penetrator fan and has room for an additional two 92 or 80 mm fans. The top of the chassis is home to a 180mm air penetrator which blows cool air into the chassis with a fair bit of force. There’s also a rear 120mm fan which draws out the hot air from inside the chassis.

As you can see, SilverStone also fitted the largest cooler they could find – which is a new model from the company itself with no less than six heatpipes and a 120mm fan – just to show how large of a cooler you can fit inside this comparatively dinky case. Full-length dual-slot graphics cards aren’t a problem either as you can see, but if you’ve been paying attention you’ve realised that we haven’t mentioned one thing so far, namely drives.

This is where the design compromises come into play as there’s “only” room for four 2.5-inch drives and they’re tucked away on the right hand side of the chassis, behind the motherboard. One other slight compromise, although it doesn’t really bother us, is the protrusion around the angled power socket, as there simply wasn’t enough space to fit this inside the chassis.

Finally the Sugo SG09 has two front USB 3.0 ports, a pair of audio jacks and a new type of dust filters that aren’t all too dissimilar to a pair of nylon stockings. These dust filters are custom made for SilverStone, but the company is also offering them as a product on their own and if you look closely you’ll see that they have a very unique design. This allows for the same amount of dust to be trapped as by a traditional dust filter, while allowing for a vastly improved air flow.

The Sugo SG09 shuns looks over practically and compactness and although we can’t say that we’re overly keen on its looks, it’s nonetheless an impressive feat of engineering. We can’t knock SilverStone for making what’s a truly unique product as far as compact chassis are concerned and it’s likely to appeal to people that lug their computer around with them to LAN parties and what not.

Kitguru says: On your shortlist for a new system build? 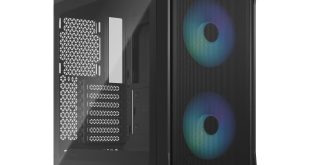