Due to this compact design, the new EK-Quantum Kinetic TBE DDC combos are ideal for the use with smaller form factor chassis equipped with high-performance hardware inside. These upgraded DDC combos from EK now feature three G1/4” ports in the top, one of the ports can be used as an inlet, equipped with the included brass tube to minimise coolant splashing inside the reservoir, reducing the chance of air entering the loop.

The other two ports at the top can be used for either filing or adding an EK accessory such as a thermal probe or LED. A further three ports are located at the bottom of the pump housing, with two of these ports front-facing to be used as inlet/outlet and a rear port that can be utilised as a drain or as an additional inlet.

Another feature of the EK-Quantum Kinetic TBE DDC is addressable RGB lighting, in the form of a ring that directs the illumination towards the coolant, any unwanted LED light hotspot are covered by a CNC machined aluminium cover. The reservoir tube remains the same 60mm diameter as the previous generation of cylindrical EK reservoirs for backwards compatibility, with an updated and more modern looking anti-cyclone insert. 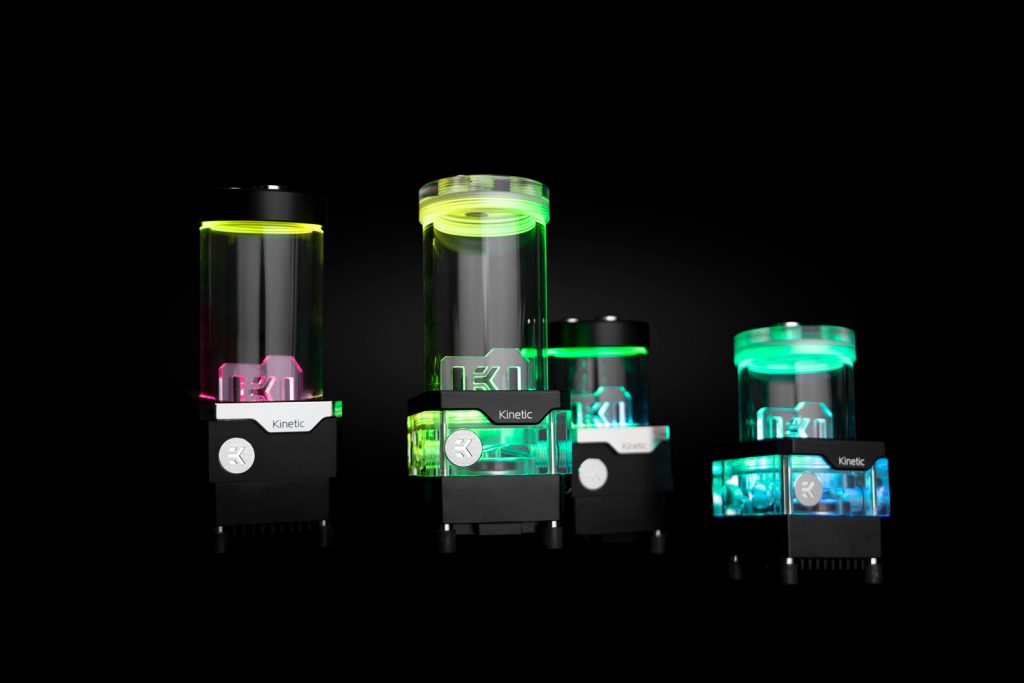 The high-performance DDC 3.2 pump inside the EK-Quantum Kinetic TBE DDC combo is capable of a flow rate up to 1000L/h with a maximum pressure head of 5.2m. Cooling of the motor is taken care of by an integrated heatsink at the bottom and the combo unit are available in four versions, with two height options (120mm and 160mm) and two material choices (Plexi and Acetal).

EK-Quantum Kinetic TBE pump-reservoir combos are available for purchase via the EK Webshop with prices starting from €171.32 for the 120mm version.

KitGuru says: EK is expanding its huge range of pump/res combo units even further with these new DDC models. What do you guys think of the new Kinetic TBE DDC combos from EKWB?