CORSAIR has an excellent track-record when it comes to all-in-one liquid coolers but it looks like some faulty units managed to slip out into the wild this year. Late last week, Corsair announced that it was issuing a product recall on a select number of Hydro Series H100i RGB Platinum SE coolers due to leakage. 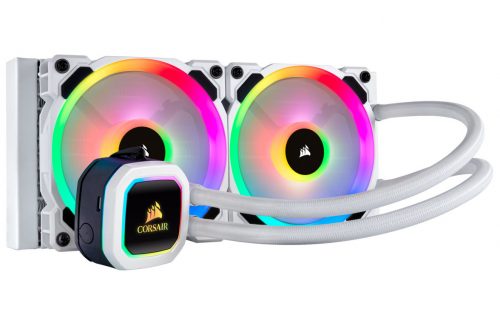 Corsair says that this recall is a precautionary measure and affects less than one percent of H100i RGB Platinum SE units. The Corsair team discovered that some units within a certain batch code were leaking small amounts of coolant into the hose sleeving. These leaks should be easy to spot, as the cooler and its tubing are white, while the coolant is bright green.

In a post on the Corsair product forums, a customer service representative noted that this issue should be immediately noticeable upon opening the box but may also creep up over time. As a result, a small batch of coolers are being recalled.

If you happen to have purchased a White Hydro Series H100i RGB Platinum SE cooler, you should take a look at the box it came in and look for the lot code found on the sticker. If your unit has the lot code ‘1852', then you'll need to get in touch with Corsair customer service to arrange a collection and replacement. An image of the code you are looking for can be found above.

Replacement units will be available from the 2nd of April 2019 onward.

KitGuru Says: A leaky AIO cooler could be quite harmful to the rest of a system, so if you bought one of these, then double check your batch and make sure you get in touch with Corsair's customer support to get it all sorted.