The first AMD EPYC 9004 series CPUs have finally been tested on PassMark, and as expected, they didn't disappoint. Besides the 32-core EPYC 9354P, the EPYC 9654 was also present. The latter is the series flagship, a Zen 4-based 96-core processor with 192 threads, a base clock of 2.4GHz and a boost clock of up to 3.7GHz. 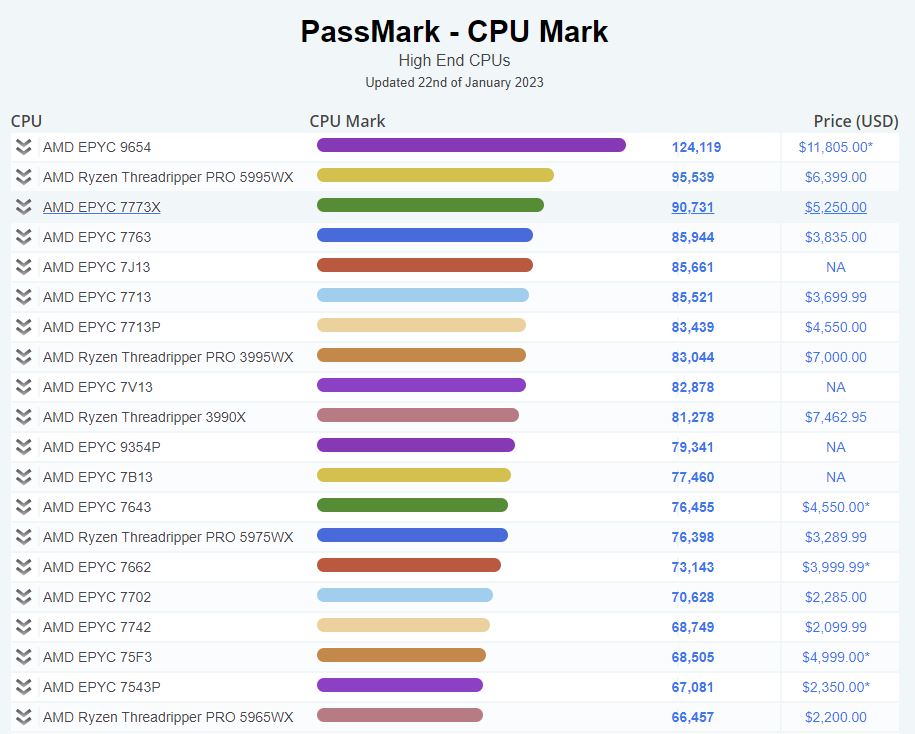 As shown in PassMark's High-End CPU ranking (via Hardware Info), the processor scored a whopping 124,119 points, beating the AMD Ryzen Threadripper Pro 5995WX (now in second place) by almost 30K points, a 29% difference in performance. Compared to its predecessor, the EPYC 7773X (Zen 3 with 3D V-cache), the new processor outscored it by 37 percent in PassMark.

Although the AMD EPYC 9654 is currently the fastest processor in PassMark, it will likely be beaten by the rumoured Genoa-X processors, based on the Zen 4 architecture with the addition of 3D V-cache tech, or the next generation of Ryzen Threadripper workstation CPUs, which should also be based on the Zen 4 architecture and feature higher clock frequencies. However, while the former will likely have a 96-core SKU, the latter may not. In any case, both series are expected to release later this year.

KitGuru says: AMD high core count processors keep dominating the PassMark chart, and as things are, it seems this dominance will continue for the time being. Maybe when Intel releases a CPU with a core count that can rival AMD's latest EPYC chips, we'll see a shift in this trend.