Today, Intel is launching its first Tiger Lake CPUs. Built to be the best option for thin and light laptops, Intel's 11 Gen Core processors are the first to debut Intel Xe graphics and will appear in more than 150 laptop designs.

Intel's latest generation of mobile PC processors promise significant gains in performance for productivity and creation apps, in part thanks to the new Tiger Lake architecture, and in part thanks to Intel's brand new Iris Xe graphics for integrated GPUs.

Getting down to the technical details, Tiger Lake (11th Gen Core) leverages Intel's new SuperFin process technology. These CPUs have scalable performance across a 7 to 28 watt thermal envelope. There are 9 configurations in total, which clock speeds ranging from as low as 1.8GHz and going all the way up to a 4.8GHz chip. You can see each SKU and its specs in the table below: 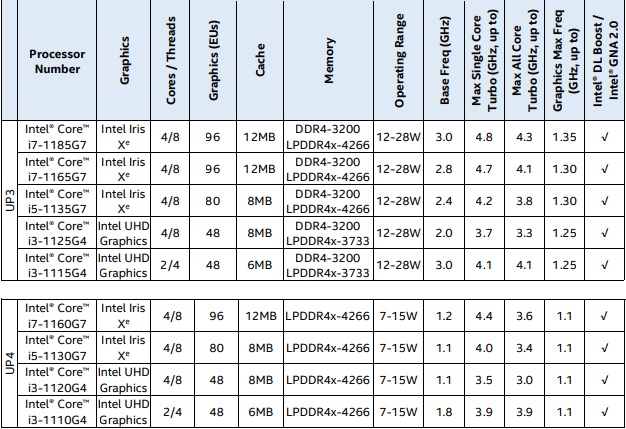 You can expect up to 20 percent better office performance, integrated Thunderbolt 4, WiFi 6 support and support for up to four 4K HDR displays all at once. You'll be seeing a ton of laptops utilising these CPUs in the months to come, with partners like Acer, ASUS, Dell, Dynabook, HP, Lenovo, LG, MSI, Razer, Samsung and more already working on new 11th Gen-equipped laptops.

This launch also sees the introduction of Intel Evo, a ‘new platform brand' for laptops. Essentially, thin and light laptops that meet certain requirements, such as using 11th Gen Core processors with Intel Iris Ce graphics, will be promoted under the Intel Evo brand, intended as a stamp of approval for ‘the best thin and light laptops'.

KitGuru Says: Intel's latest mobile processors have officially arrived. What do you all think of these new CPUs? Will you be looking at a laptop upgrade with one of these?