Yesterday’s CPU news was mostly dominated by AMD’s announcement of two Ryzen Threadripper CPUs, the 16C/32T 1950X and the 12C/24T 1920X. However, AMD also snuck in some Ryzen 3 news, revealing that two 4C/4T SKUs would be launching later this month for the mainstream desktop market. At the time, AMD didn’t reveal pricing for Ryzen 3 but the rumour mill claims to have the answer.

Ryzen 3 is AMD’s last step to fleshing out its desktop CPU lineup. There will be two SKUs, both featuring four cores and four threads, though the R3 1300X will have a 3.5/3.7 GHz base/boost clock speed, while the R3 1200 will have a lower 3.1/3.4 GHz base/boost clock speed. These will be the cheapest CPUs in the Ryzen lineup and while AMD has yet to confirm pricing, the internet claims to have the answer. 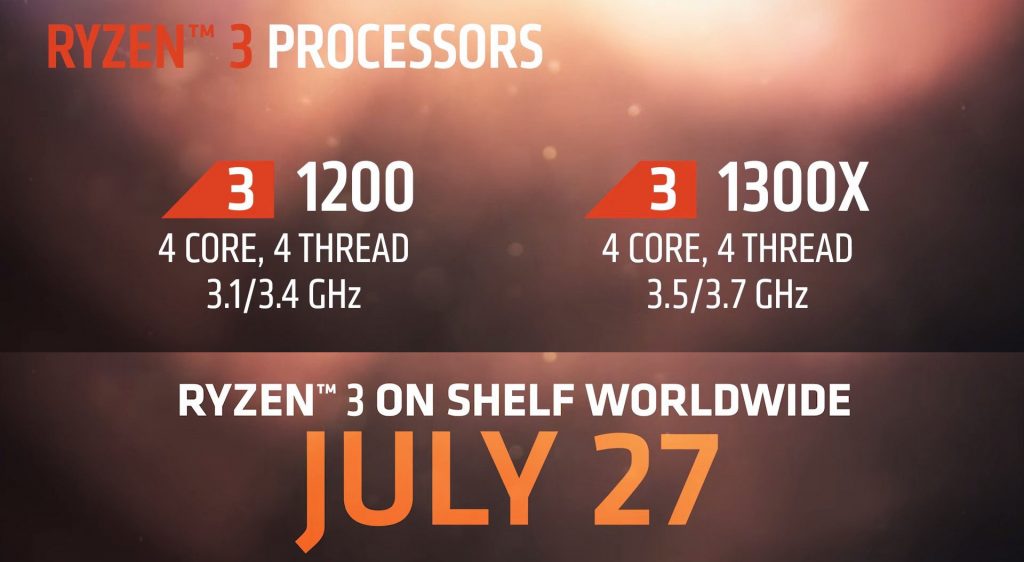 In a mysterious post to the AMD subreddit, one user claimed that the Ryzen 3 1300X would be priced at $129, meanwhile the Ryzen 3 1200 is said to sit at $109. The account that posted this information has since been deleted so take this information with a grain of salt. However, with Ryzen 3 set to hit retail on the 27th of July, we should get confirmation very soon.

KitGuru Says: I did find it odd that AMD chose to keep Ryzen 3 pricing out of its announcements yesterday. Still, this rumour gives us a good idea of what to expect when retail availability comes on the 27th.

Previous Bungie reveals what will be playable in Destiny 2 beta, preloads now live
Next Samsung might release Bixby in the US as soon as next week