While AMD provide incremental updates to its Radeon Software throughout the year, it’s taken to comprehensive annual overhauls since the release of Catalyst Omega at the end of 2014. Now, it welcomes the Adrenalin Edition, getting Radeon owners’ blood pumping with a focus on latency reduction.

It might not be the big performance increase that Radeon users are used to at this point in the year, but less input lag means that players will see the game react to their click a lot sooner than before. The biggest improvement is seen in PlayerUnknown’s Battlegrounds, in which lag is reduced by 9ms, followed by an improvement of 5ms in Titanfall 2 and Rainbow Six Siege. This might not seem like much, but this time can mean life or death to the player in competitive scenarios.

Of course the move from Crimson ReLive 17.11.1 to Adrenalin 17.12.1 yields some framerate improvements, but this AMD’s focus across the year rather than an outright gain. This will likely see driver updates every other major release, similar to that of its competitor.

AdBlock is known to interfere with our imaging code. If you can't see the above images, please consider disabling it for the full article.

Regarding new features, AMD has added a new Radeon Overlay and a mobile app called AMD Link. Its new overlay makes adjusting settings, such as Frame Rate Target Control and FreeSync, on the fly a lot easier without having to leave the game you’re in.

Combined, the Radeon Overlay and AMD Link help monitor performance, temperature and hardware, removing the need for third party apps such as GPU-Z by giving built-in access to view frame rate, GPU clock speed, GPU temperature and more. This doesn’t monitor beyond the graphics card, however, so it might not remove the need entirely. 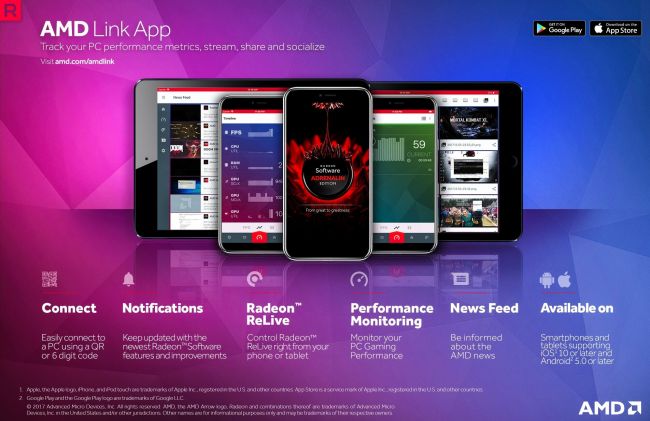 “Now gamers can tailor their gaming experience directly in-game, use our groundbreaking AMD Link mobile app to monitor their gaming performance on their phone, and in an instant, share their best highlights to their streaming platforms and social networks of choice. We've designed Adrenalin Edition as a powerful tool for those who aspire to achieve gaming greatness among friends and the community.”

AMD’s Radeon Software Adrenalin 17.12.1 is live now, with many more updates planned throughout the year.

KitGuru Says: It’s not as hard hitting as other updates, but AMD has continuously improved throughout the past two years. It’s not all about big numbers, as fast as possible, it’s about consistent and reliable performance that is delivered throughout the year. What do you think about AMD’s new Adrenalin update?