MSI and Corsair team up again for GTX 1080 Hydro GFX

If you are looking to dip your toes into watercooled graphics cards, then Corsair and MSI have you covered with the GTX 1080 Hydro, which combines the convenience of an all-in-one liquid cooler with the power of Nvidia’s latest Pascal architecture.

Much like last year’s GTX 980Ti Seahawk edition, the GTX 1080 Hydro GFX makes use of the Corsair H55 AIO cooler, along with a blower style air cooler to help cool the other components on the PCB. 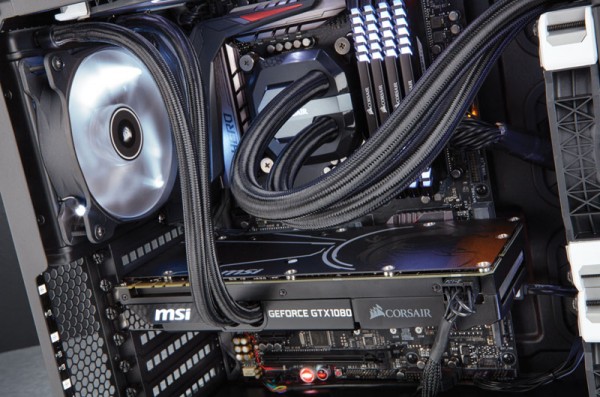 The liquid cooler will allow the GTX 1080 Hydro to maintain higher clock speeds for longer periods compared to the Founder’s Edition, which will hit its thermal limit much quicker. This GPU should hit store shelves any day now, with an MSRP of £699.99 in the UK, and $749.99 in the US.

KitGuru Says: These AIO liquid cooled GPUs seem to be getting more popular each generation. Are any of you guys in the market for a GTX 1080? Would you go with an All-in-One liquid cooled version like this, or would you rather a custom air cooler?