Shadow Warrior may have started out as a classic 90’s shooter but back in 2013 the IP was picked back up and transformed into an excellent modern title, starring Lo Wang as he battles evil forces with a deadly combination of swords, guns and demonic powers. Now this October, things are being kicked up a notch once again with the return of Wang in Shadow Warrior 2, and this time he brought some friends along.

Shadow Warrior 2 is another reinvention of the series. The story and humour aren’t going anywhere, but this time around there will be a four-player co-op mode, along with way more weapons and powers to use. 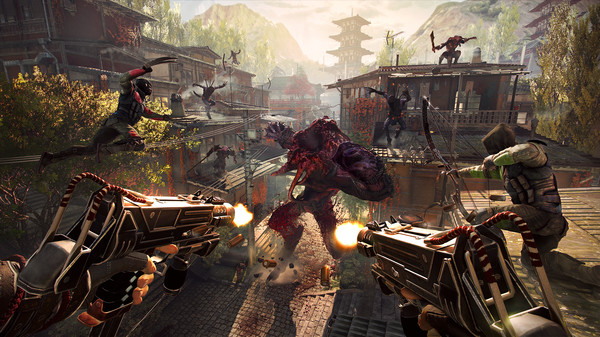 The developers confirmed that Shadow Warrior 2 would be coming to Steam in “less than two months” on the game’s official Twitter account. An exact release date wasn’t given but at least now we have a launch window to look forward to.

If you want to know a bit about the story for the sequel, the synopsis explains that it takes place five years after the events of the first game, with Lo Wang surviving as a mercenary in the wildlands, just outside the reach of his enemies. However, he is drawn back into a conflict when a simple mission goes wrong.

KitGuru Says: The 2013 Shadow Warrior reboot is one of my favourite games on PC and the sequel looks incredible with its new weapons and focus on co-op gameplay. Did any of you guys play Shadow Warrior back when it came out? Are you looking forward to the sequel at all?