Our final stop at Computex this year had us visiting the folks at Team Group. Not only has Team Group brought more RGB to the table this year, but we also got to see a new DDR4 RAM kit, their first PCIe Gen 4 SSD and a new 8TB SATA SSD, delivering the high capacity you would need to ditch that hard drive.

Watch on Vimeo below:

Team Group's T-FORCE brand is the main focus at Computex this year. The first thing we see walking into the booth is this high-end liquid cooled build with T-FORCE SSDs and RGB RAM as the centre of attention. This is primarily used to show off the new TFORCE M.2 SSDs, which come with heat shields filled with liquid coolant, although you won't be able to hook it up to a full custom water loop.

Team Group is also jumping in on RGB and creating its own all-in-one ecosystem, complete with RGB fans, headers and a control box to hook it all up to. Right next to those though is something we found a bit more exciting, the new Z440 M.2 NVMe SSD. This is Team Group's first PCIe 4.0 SSD and will deliver speeds of up to 5GB/s.

In the video and gallery above, you will also get a look at the new T-FORCE memory modules, which come with new heat sink designs and are available in RGB or non-RGB options.

KitGuru Says: What do you guys think of the latest gear from Team Group? 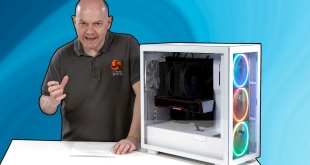