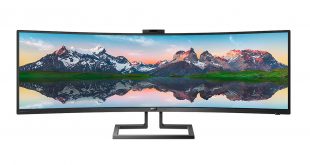 If you thought a 21:9 ultrawide monitor like ASUS's ProArt PA34VC was pretty extreme, think again. Philips has taken screens to a new level of width with the SuperWide Brilliance 499P9H. It really is as ginormous as the picture below implies. The panel has a 49in diagonal, and the aspect ratio is 32:9, which means when you're sitting in front of it at your desk the edges are beyond your peripheral vision.

The resolution is as gobsmacking as the aspect ratio, too. There are 5,120 pixels horizontally and 1,440 vertically. This isn't quite as many as a full 5K screen, which would have twice as many vertical pixels. But that's still a lot of pixels, certainly more than you would want to count, particularly when drunk. It's also likely to push the capabilities of even the latest NVIDIA GeForce RTX 2080 graphics with some titles, so you may need to adjust quality levels to achieve a comfortable frame rate.

However, this isn't a monitor aimed at high-FPS gaming, as it's pegged to 60Hz at its native resolution. It also has a 5ms grey-to-grey pixel response, where the latest pro gaming panels are claiming under 1ms. This is more a screen for multimedia or titles that don't need maximum refresh, such as flight simulators.

With a 450cd/m2 brightness rating and 3,000:1 contrast, thanks to its use of VA panel technology (which is preferable for curved displays), the 499P9H has plenty of potential for consumption of vibrant, immersive multimedia. 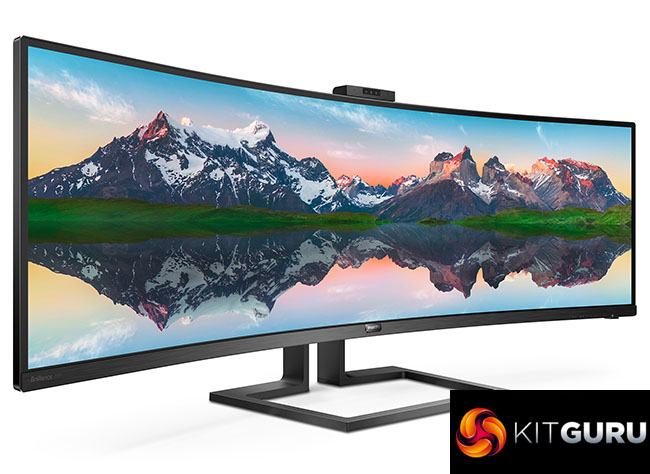 You do pay a fair wedge to obtain this massive screen – nearly £900. But aside from the huge screen, you also get a comprehensive set of additional features. Alongside two HDMI 2.0b connections, there's DisplayPort 1.4 and even USB-C for combined video and data.

For convenience, there are three USB 3.1 downstream ports and a 2Mpixel webcam on the top, so videoconferencing is a possibility, with a pair of 5W speakers built in as well. Despite the width of the panel, Philips has still chosen to equip it with a stand that allows considerable adjustability.

You can raise and lower the screen by 130mm, swivel it 20 degrees in either direction, and tilt it forwards and backwards.

So, apart from a high refresh rate, there's not much missing in terms of features here. Philips also claims 121 per cent of sRGB gamut, 91 per cent Adobe RGB, 99.67 per cent of BT. 709 and 94.62 per cent of DCI-P3, so in theory this screen is very well suited for watching movies.

On paper, then, the 499P9H has a wide range of abilities as well as being physically broad. Or is this a case of “never mind the quality, feel the width”? Let's find out.