Hybrid memory cube 2.0 to offer up to 480GB/s of bandwidth

The hybrid memory cube consortium (HMCC), an organization dedicated to the development and establishment of an industry-standard interface specification for the hybrid memory cube (HMC) technology, this week introduced version 2.0 of the HMC spec. The second generation of the “cubes” will be able to support bandwidth of up to 480GB/s per one memory device, an unprecedented performance.

The HMC uses advanced through-silicon vias (TSVs) – vertical conduits that electrically connect a stack of individual chips – to combine high-performance logic with dynamic random access memory (DRAM) die. The first commercial HMC 1.0 implementation is sampling from Micron in a 2GB density with an unprecedented 160GB/s of memory bandwidth, while running at 10Gb/s per late data-rate and using up to 70 per cent less energy per bit than existing technologies.

The new HMC 2.0specification supports increased data rate speeds advancing short-reach (SR) performance from 10Gb/s, 12.5Gb/s, and 15Gb/s, up to 30Gb/s, allowing to boost peak bandwidth of a single memory cube up to 480GB/s. The new specification also migrates the associated channel model from SR to VSR to align with existing industry nomenclature. The ultra short-reach (USR) definition also increases performance from 10Gb/s up to 15Gb/s. 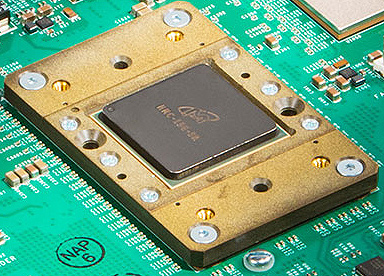 The first-generation specification was completed and released publicly in April 2013; several developer and adopter companies, including Altera, Xilinx, and Open-Silicon, have already begun leveraging the specification to design products and solutions that incorporate HMC technology.

The HMCC, founded by leading memory providers Micron Technology, Samsung Electronics, and SK Hynix, has begun circulating this draft specification to a broad range of adopters, with the goal of incorporating adopter members’ input and targeting a completion date of May 2014 for the final version.

KitGuru Says: Theoretically, hybrid memory cubes could be used on next-generation graphics cards. GPUs are always hungry for bandwidth, whereas graphics cards need to be small due to industrial trends towards miniaturisation. Hence, HMCs may be just what the doctor ordered.

We have a new world record holder for the fastest DDR4 memory. This week, HyperX …