Little is known of the device’s specs, however. HP has disclosed it will weigh 4.5 Kgs (10 lbs), include dual batteries for hot-swapping without powering down the system. The batteries are carried at waist-level as part of the backpack’s harness. It will use a low-power Intel CPU but an as-of-yet unknown GPU. The shell includes two type-C USB 3.0 ports and one HDMI port for connectivity. It will also have audio out and a power plug for your VR headset of choice. The design was primarily created for the likes of the HTC Vive, but it should work with just about any VR headset. 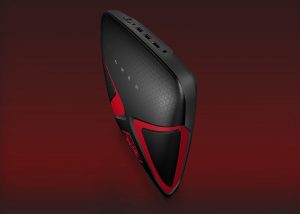 With the Omen X VR Backpack, the headset is connected directly to the device strapped to your back, leaving you with freedom of movement for VR/AR funtage. Omen X Backpacks will come in two flavours, according to Ron Coughlin, president of the Personal Systems Business at HP – one for gamers and another for more commercial applications.

HP is actively pursuing VR development and inviting app developers and gamers to come up with new apps and uses for the device, but it is a safe bet the military-industrial complex will be happy to contribute. The military are particularly interested in the device for training purposes, according PC World.

The company has not yet announced any pricing, but according to the article it’ll carry a hefty price tag due to the component requirements – a powerful CPU and GPU, together with other more robust components that can handle being strapped to your back.

Some competitors are already shipping competing products, such as the Zotac VR Go ($1,750) and MSI’s VR One ($1,899), while Dell will be showing off its Alienware-branded model soon.

KitGuru Says: Expect an Omen-branded backpack PC/VR system to cost an arm and a leg, HP is making no fuss about it, but (apart from military applications) these devices still need a “killer app” to give them the boost they need.